How the Spirit of Pacific Southwest Airlines Lives on at Southwest 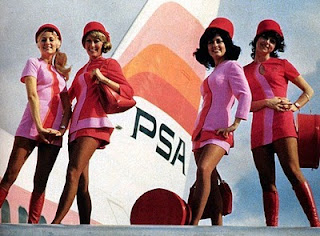 When Herb Kelleher and Rollin King sketched out their idea for Southwest Airlines on a cocktail napkin, they both knew they were facing tremendous odds against the large airlines that operated in Texas already like Braniff, American, and Texas International. One of their weaknesses was a lack of airline experience which they solved by bringing aboard veteran industry executive Lamar Muse who started out in 1948 at Trans-Texas and worked at American, Continental, Southern, among others and most notably was president of Fort Worth-based Central Airlines before it was bought up by Frontier in 1967.

With the nascent Southwest still fighting legal battles to win the rights to start service in Dallas, Rollin King and Lamar Muse visited Pacific Southwest Airlines' San Diego headquarters in 1969 to meet with the president of PSA, J. Floyd Andrews and the airline's management. King and Muse put it to Andrews bluntly- PSA was a successful intrastate airline for 20 years and they felt that they had an analogous situation in Texas as PSA did in California- large cities separated by a distance that could make for a profitable airline flight. They needed PSA's help in learning the tricks of the trade to become a successful intrastate carrier against the stiff competition of the incumbents, much as PSA managed to carve out a niche in California against United and Western.

Andrews was flattered by Lamar Muse and Rollin King's request and asked his management to cooperate with Southwest completely and not hold back on any of the tricks PSA learned to become successful with a loyal customer base. Between court hearings to get Southwest airborne, Herb Kelleher himself made several trips to San Diego to examine the operations of PSA.

PSA's management was so enamored with the ambitious Texans that they even sold them pilot uniforms, transition training on the Boeing 737 (when it became clear that the 737-200 would be Southwest's aircraft) along with training for the customer service personnel for Southwest. Flight attendant training was observed, inflight practices and procedures were shared, and even station operations were explained to the nascent Southwest operation. Even the financing and marketing departments of PSA welcomed Southwest's personnel for training sessions. The training sessions for Southwest's personnel began in 1970 and Andrews even let Southwest's representatives fly the jumpseat to observe PSA flights. They would carry notebooks in which they noted everything the pilots and cabin crew did that was unique, from funny announcements to inflight contests. Southwest's first marketing people sat in PSA boarding lounges throughout California observing the service levels and the humor PSA's gate agents used on a regular basis.

The head of PSA's computer reservations department even spent time in Dallas helping Southwest get its own system up and running! Andrews even had all of PSA's training and service manuals reprinted for Southwest to use in its early days, removing "Pacific" from "Pacific Southwest Airlines" and substituting "Texas" for "California".

When Southwest inaugurated its first flight on 18 June 1971 from Dallas Love Field, they started out with 22 years of airline operations thanks to the tutelage and generosity of the everyone at PSA. Even though PSA disappeared into history in 1986 when it was bought by USAir, much of what made PSA successful in its first quarter century lives on today at Southwest Airlines.