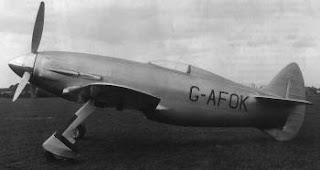 During the Second World War one of the most powerful inline piston engines was the British Napier Sabre, 24-cylinder piston engine in an H-block layout (imagine 2 flat 12-cylinder engines on top of each other) that in its first versions developed 2,200 horsepower and its late-war versions developed as much as 5,000 horsepower. The Sabre powered the Hawker Typhoon and Tempest fighter bombers but the first aircraft to use Napier's innovative engine flew for only a short time before the start of the Second World War. During the interwar period there was considerable national rivalry in setting aviation world records, one of which was unlimited speed record.

In 1934 the record was held by the Italians at 440.6 mph set with the Macchi-Castoldi MC.72 floatplane powered by a 24-cylinder Fiat engine. The British were aware that the Germans would making an attempt at the world speed record using the Daimler-Benz DB601-V12 engine that was under development and more advanced than any other engine of the day (the DB601 would go on and power the Messerschmitt Bf 109 fighter). The Napier Sabre team decided to build its own record-breaking aircraft powered by the Sabre engine. They had one of two p0ssible goals- to either wait for the Luftwaffe to set the record and then use their aircraft to break it right away or to fly and set a record that was so fast it couldn't be broken for years.

Rather unusually with with method, Napier selected the small light aircraft company Heston to build what would be called the Napier-Heston T.5 (for Type 5, the fifth type of Heston aircraft they had built). Heston was selected because they had an established reputation for fine woodwork in their aircraft- with wood being light, strong, and not needing rivets- some have called wood "God's composite material"- the wooden Heston design would be strong yet very light.

The aircraft was then finished with 20 coats of lacquer paint to a smooth finish and any scratch more than 0.0005 inches in depth was polished out in areas like the wing leading edges. George Cornwall, the chief designer from Heston, and Arthur Hagg, the lead Napier engineer on the project, created an aircraft of unparalleled smoothness and aerodynamic fineness. One of the key features of the T.5 was it's midfuselage belly radiator, the first aircraft to have one that would be echoed in the later North American P-51 Mustang. The belly scoop was designed to bleed off the turbulent boundary layer air to ensure a smooth airflow into the air scoop. After passing through the twin oil and glycol radiators, the air was exhausted on each side of the rudder via D-shaped exhaust ports. The cockpit canopy was a small, one piece blown perspex bubble similar to what is on today's Reno Unlimited Class racers.

The T.5 weighed in at 7,200 lbs, 2,900 lbs of which was the Napier Sabre engine- a staggering 40% of the aircraft's weight. By comparison, the P-51 Mustang weighed in at 9,200 lbs empty with its Merlin engine accounting for 1,645 lbs of that weight- only 18% of the total. For its flights, the Napier Sabre was tuned to produce 2,650 horsepower. As the British government was preoccupied with numerous military projects, the Napier-Heston T.5 would use private backing to make its record flight.

With delays in the ground runs and taxi tests, the T.5 finally took to the air on 12 June 1940. It had been just over a year since the Germans took the world record with the Messerschmitt Me 209 and its DB601 engine with a speed of 469.22 mph. The British were gunning for 480 mph with the T.5. With Heston's chief test pilot G. Richmond in the cockpit sans canopy, the first flight was planned to be a basic exploration of the aircraft's handling qualities. Five minutes into the flight, the engine was overheating and Richmond found the aircraft to be overly sensitive in pitch. Lacking the canopy, he was buffeted by the 200-mph slipstream. Then a broken radiator fitting scaled him with steam from the radiator. He hastily made for landing without a good idea of the aircraft's ideal landing speeds only to discover what the stall speed was when he was still 30 feet above the ground.

The T.5 pancaked into the ground, driving the landing gears through the wing. The tail broke off and Richmond survived with significant burns. No further attempts were made as one month later the Battle of Britain began. The T.5 had a total of six minutes of flying time.