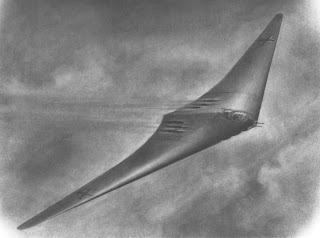 In the 1930s Germany, the Horten brothers, Reimar, Walter, and Wolfram, had made a name for themselves creating elegant flying wing gliders of an advanced design. They joined the Luftwaffe in 1936 as pilots, but Reimar and Walter were encouraged to continue their advanced design work while Wolfram went on become a Heinkel He 111 pilot. He was killed in battle having been shot down over Dunkirk in 1940 but had participated in the early development of the Horten glider designs. With the outbreak of the Second World War in 1939, they were offered jobs with Heinkel and Messerschmitt, but disagreements with Ernst Heinkel and Willy Messerschmitt scuttled any employment with the prestigious firms. With knowledge of Northrop's advanced flying wing work in the United States and a war going on, senior Luftwaffe officials established Sonderkommando 9 at Gottingen Airfield with the brothers in command to allow them continue development work on their flying wing designs.

In 1944 the German Air Ministry (Reichsluftfarhrtministerium, RLM) issued a requirement for a long-range bomber that was capable of bombing the East Coast of the United States. The RLM called for an aircraft that could fly at high altitude for a round trip of 7000 miles and carrying either four tons of bombs or one "special weapon". Five designs were submitted, but every company that participated had aired concerns that the requirements were beyond existing technology. As a result, the RLM scrapped the competition.

Though they didn't submit a design for the long-range bomber, the Horten brothers were aware that none of the designs could meet the demanding specifications. On their own they decided to work on a flying wing design that they thought might be better able to make the trans-Atlantic bombing mission. Designated the Ho XVIII Amerika Bomber, the Hortens had created 10 different design variations by January 1945. Their preferred design was a pure flying wing design with six buried engines that would have been either the advanced Heinkel He S 011 turbojet or the Junkers Jumo 004B design, the Heinkel engine obviously being preferred. The intakes were located on the inner wing leading edges. Various weight saving measures were considered from using rocket-assisted takeoffs from a trolley to mid-air refueling.

On 25 February 1945 the brothers were invited to Berlin to present their Amerika Bomber design to the RLM. Also present were representatives from the five companies that had participated in the original competition. Several days later the RLM informed the Hortens that their design would meet the original specification but that Junkers would build the bomber with assistance from Messerschmitt. At a later acrimonious meeting with the engineers from the two firms, the Ho XVIII bomber ended up with a major redesign, ending up with a large central fin, fully retractable undercarriage and the use of the Jumo 004B turbojets in two nacelles under the wings. As a result, Reimar Horten created a compromise design designated the Ho XVIIIb that used the preferred Heinkel engines. With the war going poorly for the Nazi regime, the RLM wanted the bomber in service as soon as possible. Two large underground hangars were constructed to use as production facilities along with construction of a suitable runway in the German state of Thuringa.

The RLM anticipated production in the fall of 1945, but the war in Europe ended with the German surrender in May 1945. It's not known if any work had started on the Ho XVIII, but given the poor reliability of the early jet engines- the Jumo 004B were worn out after only 25 flight hours- it seems a tall order for a jet bomber to be able to reach targets on the US East Coast from Germany and even it was possible, the sheer amount of war material that was being poured into the European war effort would have made any such attacks unlikely to have changed the course of the war. In 1944 alone, the amount of fuel consumed by a single Allied one-thousand bomber mission over the Reich was more than the entire German petroleum refining output for an entire month!