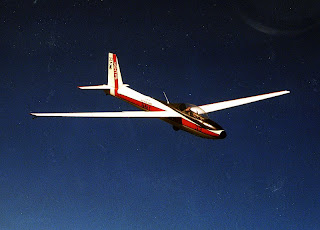 In 1968 the US Naval Test Pilots School (NTPS) at NAS Patuxent River, Maryland, was struggling how to teach its test pilot students the phenomenon of inertia roll coupling, where the inertia of the heavier fuselage can potentially overcome the stabilizing effects of the wing and tail, particularly in high speed flight. Intertia roll coupling became more of an issue in the fighter aircraft of the day which often boasted long slender fuselages and relatively short span wings. The standard naval jet trainer of the day, the North American Rockwell T-2 Buckeye, despite its benign handling characteristics as a trainer, would react too quickly and at times dangerously to be an effective teaching tool on the phenomenon. The Navy needed an aircraft that had a unusually slow roll rate with a slow speed and good recovery characteristics to that the students of the NTPS could see and experience the evolution and recovery from inertia roll coupling.

The longer the wing span, the slower the roll rate. This made a long-span wing necessary and having a slow speed and good recovery characteristics made a glider aircraft the ideal platform. In an unprecedented move to quickly acquire the right aircraft for the NTPS, the Navy purchased two stock Schweizer SGS 2-32 two-seat sailplanes that could be towed aloft by another unusual aircraft in the NTPS inventory, De Havilland Canada DHC-2 Beavers which were in use to acquaint the NTPS students with tailwheel aircraft and STOL flight.

In order to circumvent the usual lengthy and bureaucratic procedures that come with aircraft acquisition, the Navy had the X-plane designation X-26A assigned to the gliders. They later would be christened "Frigate" after the frigate sea bird. The two X-26A Frigates entered service with the NTPS in August 1968. As the Navy's pilots were inexperienced in glider operations, the NTPS instructors were trained at Schweizer's factory in Elmira, New York. The first two X-26A Frigates were lost in fatal accidents in 1971 and 1972. A third X-26A was procured and unfortunately it, too, was lost in a fatal accident in 1980. Two more X-26A Frigates were purchased to replace the losses that year and to this day they still fly with the NTPS. With two classes going through the rigorous NTPS course each year with an average class size of 30-36, the two Frigate gliders are kept busy.

At one point there was an X-26B. Lockheed and DARPA had a concurrent program that wasn't part of the X-plane program to develop a quiet sensor platform for the Vietnam War. Two Schweizer SGS 2-32 gliders were used in the Project Prize Crew and when they became redundant to the the program, they were passed on to the NTPS as a powered gliders and designated X-26B. One was kept as a spares source for the other which flew, but the X-26B had to be withdrawn from the NTPS due to maintenance problems with its unique modifications for the Project Prize Crew.

This year marks the 42nd consecutive year of X-26A flight operations at NAS Patuxent River, making the Frigate glider the longest-running X-plane program in history, beating out the second longest program, the Bell X-14 VTOL testbed, by a substantial margin.