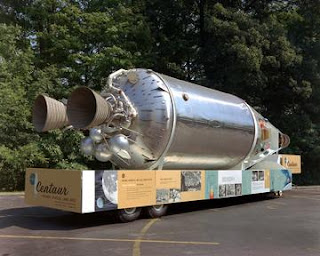 During the early days of the American space program, there were two schools of thought in liquid-fueled rocket design. One group, represented by Werner von Braun and his team of NASA engineers at the Marshall Spaceflight Center, favored rockets with strong internal structures similar to that of monocoque aircraft. The other group, represented by the Atlas missile engineers at Convair, favored rockets with a thin aluminum shell that used pressurization of the tank and its propellants for structural integrity- what was called balloon skin construction.

The Atlas team had already proven their structural technique would work as the Atlas had already entered service as the first American ICBM and it was already being used for space launches from satellites to the manned Mercury program. The main engineers behind the Atlas, Charlie Bossart and Kraft Ehrlicke, were planning a high-energy liquid fueled upper stage that could be used on the Atlas to boost its orbital payload. This was the Centaur upper stage and it would use the first rocket engine to use liquid oxygen and liquid hydrogen- while liquid oxygen was commonly used as an oxidizer, the Centaur and its Pratt & Whitney RL10 rocket engines pioneered the use of liquid hydrogen- it was much colder and tricker to handle, but combined with liquid oxygen it offered a quantum leap in performance.

Early in the Centaur program the USAF was the main customer, but bureaucratic changes and shifts in mission funding requirements led the Centaur program to be transferred from the Air Force to NASA. As a result, the two main schools of thought in liquid-fueled rockets came to clash in 1962.

Von Braun's team offered a more conservative approach that was being incorporated in their work on the Saturn launch vehicle. Von Braun, now being placed in the position of overseeing the Centaur program, sent his structural engineering chief, Willie Mrazek, to San Diego to review the progress on the Centaur program. Convair's engineers by that point had already developed a reputation as being the "unruly wards" of the Marshall Spaceflight Center and while the USAF was willing to push the technological envelope, the safety-minded culture of NASA desired a less risky approach. Mrazek came to Convair in 1962 not terribly pleased with the balloon skin design of the Centaur.

The heads of Convair tried their best to keep Charlie Bossart and Kraft Ehrlicke clear of Mrazek during his visit. During a technical presentation on the Centaur's construction, unbeknown to Mrazek who was seated in the audience, Charlie Bossart managed to sneak into the presentation and took the seat right to Mrazek. As the presentation proceeded, Mrazek was constantly shaking his head and muttering to himself what he thought was wrong with the Centaur's design. By this point, Bossart had had enough despite his explanations to Mrazek (imagine these two men arguing in a loud whisper in the back of an auditorium) and took him outside. Deane Davis, Convair's deputy director for technical control and Ehrlicke's immediate superior, was convinced that Bossart was taking Mrazek outside to settle the score with fisticuffs.

Bossart took Mrazek to the outdoor factory yard where a brand-new Centaur upper stage sat, its polished thin aluminum skin gleaming in the sunlight. "What's inside it?" asked Mrazek. "Just nitrogen" replied Bossart, at which point he handed Mrazek a hammer and invited him to pound a hole into the side of the Centaur. Without the nitrogen pressurization, the Centaur would collapse under its own weight. Mrazek couldn't believe that gaseous nitrogen was keeping the Centaur's structure, so he took a swing at the rocket stage. The first hit was only a glancing blow and hardly scratched it. I can only picture Bossart at this point egging Mrazek on to hit it harder- which he did. The hammer rebounded off the skin and hit Mrazek in the face, knocking his glasses off. Again, the skin remained unscathed.

Bossart's point was made at the expense of Mrazek's ego and his glasses. The Centaur program proceeded onward from that day in 1962, and the Centaur is still in use today as a second stage on launch vehicles like the Atlas V. It was successfully used on the Titan series of launch vehicles and is currently under consideration as a high-energy upper stage on the new Delta IV rocket.

Source: To Reach the High Frontier- A History of US Launch Vehicles, edited by Roger D. Launius and Dennis Jenkins. The University Press of Kentucky, 2002, p344-345.
at 20:36