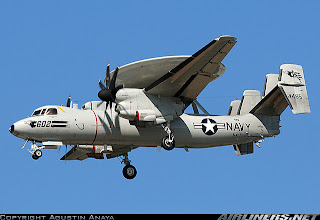 In the early morning hours of 29 August 2005, Hurricane Katrina made landfall near New Orleans as a Category 4 storm. In addition to the widespread flooding and destruction, the storm also destroyed much of the area's communications infrastructure from cellular towers to air traffic control systems. As an integral part of Joint Task Force-Katrina (JTF-Katrina), the US military, civilian agencies, and those nations who came to assist needed airspace coordination with as many as 80 helicopters alone airborne throughout the area rescuing survivors and inbound relief flights and outbound evacuation flights.

Two Navy E-2 Hawkeye squadrons provided air traffic control and coordination as well as a detachment of P-3 AWACS aircraft from the US Customs Service. The two Hawkeye squadrons involved were the reserve unit VAW-77 "Nightwolves" (call sign WOLF) from NAS Atlanta and VAW-126 "Seahawks" (call signs SEAHAWK and CLOSEOUT) from Carrier Air Wing Three embarked on the USS Harry S Truman which was sailing in the Gulf of Mexico assisting with relief efforts. In addition, the US Customs P-3 AWACS (which use a similar radar system as the E-2) from their home base in Corpus Christi (call sign OMAHA) also assisted the Navy Hawkeyes.

The E-2's radar and extensive communications suite allowed the crews to monitor the airspace, assist in location of stranded survivors, direct rescues, air traffic control and even identify with the radar safe landing areas and locations of tall obstructions. The two squadrons adopted the same system used for directing close air support for the New Orleans environment, using a grid and keypad system overlaying the area to coordinate and direct rescue aircraft and deconflict the airspace much in the same way fighters and strike aircraft might be directed to targets. At times a single E-2 might be controlling as many as 80-90 helicopters operating over the metropolitan area.

The E-2 Hawkeye has a crew of five- two pilots up front and three NFOs (naval flight officers) in the back who provide the airborne control and communication. The center seat is usually occupied by the commander or combat information officer who directs the efforts of the two NFOs on each side. Many of the helicopter pilots involved in the relief preferred working with the E-2 Hawkeyes as the smaller number of crew aboard made decision-making quick compared to the larger platforms like the P-3 AWACs. All one of the NFOs would have to do to direct a rescue effort was to turn to his commander and ask for clearance.