The AVE Mizar: The Flying Pinto 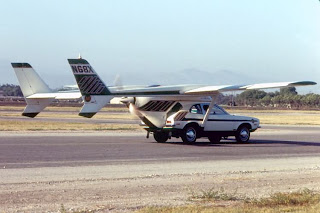 From yesterday's Taylor Aerocar to today's Terrafugia, designers and engineers have always dreamed of ways to combining the speed and convenience of flight with the ease and familiarity of automobile travel. Nearly all of the designs that have reached flight hardware status have involved custom-built cars combined with custom-built wings and empennages for flight. But one aeronautical engineer in 1968 dared to think differently and went with an off-the-shelf solution for both components that he was sure would make the flying car practical.

Henry Smolinksi earned his engineering degree from the Northrop Institute of Technology and had devoted a considerable part of his career working with North American Aviation and later, on Rocketdyne. In 1968 he founded his own design firm, Advanced Vehicle Engineers (AVE) based at Van Nuys Airport in southern California to bring his flying car ideas to the forefront. Rather than develop the car and aircraft components anew, Smolinksi thought it would be easier and more economical to use the wings, rear engine and twin tail booms from a Cessna 337 Skymaster mated to special fittings that could be adapted to just about any suitably light consumer automobile. For his prototype, Smolinski chose the Ford Pinto, a lightweight and inexpensive compact car.

Smolinski named his flying car the AVE Mizar, after the binary star in the handle of the Big Dipper. He forecast that it would be ready for the general sales by 1974 and would cost less than $30,000, much less than any general aviation single available in those days. Smolinski brought aboard Hal Blake as the VP of AVE and Bert Boeckmann, a lead salesman in a local southern California Ford dealership, to be responsible more the sale, marketing and distribution of the AVE Mizar via Ford dealers nationwide.

The Pinto had its dash modified to accommodate flight instrumentation and the steering column was also modified to also function as a control yoke as well as a conventional steering wheel. Retractable rudder pedals were also added that folded out of the way to provide access to the brake and gas pedal when in car mode. A set of self-guiding rails were installed on the roof of the Pinto and in effect, the car would be backed up into the the former Skymaster components. In the AVE Mizar prototype, the control linkages ran underneath the car and wing struts fitted into the slots on the lower door sill to support the wings. According to Smolinski, the Mizar would cruise at 13o mph with a maximum speed of 150 mph and a range of 500 miles. Take off roll was only 500 feet as was the landing roll- the car's engine could be used during takeoff to increase the acceleration of the Mizar and the car's brakes were used to shorten the landing run. He estimated that about 55 different production vehicles would be suitable for modification as the former Skymaster components could lift a car with a maximum weight of 3,800 pounds.

The AVE Mizar was formally unveiled at Van Nuys Airport on 9 May 1973. To demonstrate the ease of use, AVE's team planned to use women as test pilots. Taxi tests began in August at Oxnard Airport in Ventura County. By the time of its first flights, AVE had invested $2 million into the design and the first several flights were successful. On 11 September 1973, Smolinkski and Blake took off in the Mizar with Smolinski in the left seat. Climbing through 400 feet, the right wing strut broke free and the right wing folded on itself, sending the Mizar crashing to the ground, instantly killing AVE's president and vice-president. The NTSB's investigation revealed a faulty weld where the right wing strut joined its fitting in the lower right door sill.

The future of the Mizar died in that crash and the flying Pinto was faded into history as another aeronautical curiosity. There is a good website devoted the AVE Mizar at www.cookieboystoys.com/mizar.htm. Highly recommended for a full dose of avgeekiness!