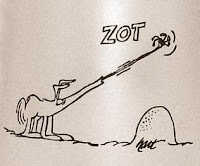 The first laser designation system used on a fighter aircraft probably goes to the AVQ-9 Pave Light system that was first fielded by the USAF on the McDonnell Douglas F-4D Phantom in the late 1960s. First tested at Eglin AFB on an F-4C, the "Zot Box" was mounted on the left canopy frame of the WSO's cockpit and the aircraft had to be flown in a left pylon turn (similar to that used on the big gunships in Vietnam) so the WSO could keep the laser manually pointed at the target while other aircraft dropped the laser-guided bombs.

In case of ejection, the WSO would have to demount the "Zot Box" before ejecting, an obvious limitation that eventually led to pod mounted systems, the first of which was the AVQ-10 Pave Knife. The nickname "Zot Box" came about from the anteater character in Johnny Hart's "BC" cartoon strip.