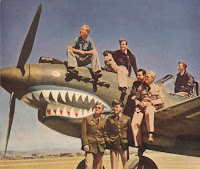 The first pilots of the American Volunteer Group (AVG) arrived in the China-Burma-India combat theater in September of 1941, disembarking ships in Rangoon, Burma. Getting up to speed with General Claire Chennault's rigorous training program while battling supply problems sapped morale of the first Flying Tigers. While the main force of the AVG was based in Kumming, China, the Japanese occupation of French Indochina and subsequent arrival of Japanese forces in Thailand meant that the 750-mile Burma Road from Rangoon's port to Kumming was China's only real supply line to the outside world in their fight against the Japanese.

As a result, Chennault dispatched his 3rd Pursuit Squadron of the AVG back to Rangoon to support the small RAF Brewster Buffalo force of No. 67 Squadron already stationed there to defend the port city. On 23 December 1941 the Flying Tigers of the 3rd Pursuit Squadron went into action repelling a Japanese bombing raid on Rangoon- the AVG shot down 10 bombers and one fighter with a loss of four planes and two pilots. The Royal Air Force shot down three fighters but lost five Buffalos and their pilots.

Angered by their losses at what they thought were amateurs on the 23rd, a larger Japanese force of 60 bombers and 20 escorting fighters attacked on Christmas Day. The 3rd Pursuit Squadron mustered 13 Tomahawks (the most any AVG squadron had managed to do at once) and along with the RAF Buffalo fighters, their charged head-first into the large formation as it approached Rangoon.

The RAF shot down eight bombers but lost another five fighters and the rest of their Buffalo force was destroyed on the ground. The Flying Tigers, though, claimed 24 to 28 bombers (postwar research indicates that 10 were shot down, and another eight ditched in the sea off the coast of the city) with no losses to their own pilots. The 1941 Christmas Day air battle over Rangoon was the first time the Japanese faced serious aerial opposition and in post war interviews, the Japanese pilots reported being impressed with the aggressiveness and persistence of the Flying Tigers.

It marked a turn-around for the AVG and morale soared. Western newspapers reported on the success of the Flying Tigers at a time when the Allies were facing defeats on multiple fronts in Europe, the Mediterranean, and the Pacific. The Japanese Army Air Force had to adopt diversionary strikes which diluted the effectiveness of the main striking body. By the end of the month, the 3rd Pursuit Squadron was relieved by the AVG's 2nd Pursuit Squadron and they took an even more aggressive approach, raiding Japanese airfields in Thailand.