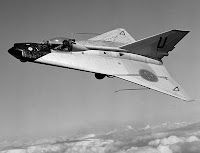 It was in 1949 that a memo from the Swedish KFF (Royal Swedish Aircraft Board) that the specifications that resulted in the Saab J35 Draken began to take shape. Considering that the J29 Tunnan had made its maiden flight just a year earlier, the KFF asked for a supersonic interceptor. As supersonic flight was still a relative unknown in those days, in January 1950 several Saab engineers proposed a flying test aircraft christened Sound Barrier. As there was still unease about reliance on wind tunnel testing, it was hoped that the Sound Barrier test aircraft would go supersonic by 1952 and assist the aerodynamics layout work on the proposed J35.

Erik Bratt, the head of the J35 program, proposed use of a tailless delta as meeting the KFF's specifications and he assigned nine Saab engineers the task of building a subscale flying test bed to prove the planned double delta layout of the J35 Draken. Though less ambitious than the planned Sound Barrier aircraft, the small group of Saab engineers produced the Saab Model 210 "Lilldraken" in just nine months. Cost considerations meant that supersonic testing would have to be done on the full-scale Draken prototypes. Powered by a small 881-lb thrust Armstrong Siddeley Adder jet engine that was used on the Jindvik target drone as a pure jet derivative of the Mamba turboprop, it was barely enough to get the Lilldraken airborne and the Saab 210 would be limited to low-speed testing.

The layout of the Saab 210 alarmed the general staff of the KFF. One influential member, General Jacobsson, is said to have remarked "What the hell is this, an aircraft must have a damned tail, for heaven's sake!" To satisfy the KFF, Saab's drawings of the J35 included a small tail but there was never an intent to fit such a tail on the J35.

To assist Saab before the Model 210's first flight, a swing-line Draken powered by pulse jet engine was tested and the 1/7 scale models showed that of all the layouts being considered, General Jacobsson's tailed delta was the most unstable!

The Model 210 Lilldraken made its first flight on 20 December 1951. Despite the anemic performance of the test aircraft, Ollie Krinker, one of Saab's test pilots, gave a sparkling flight demo over Stockholm in July 1956 to mark the city's 700th anniversary. Modifications to the nose and intakes were made to be more representative of the J35 Draken's layout and after over 1,000 flights it was retired to the Flygvapen Museum at Linkoping.