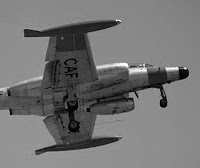 The last Avro Canada CF-100 Canuck flight took place on 28 June 1982, but it wasn't with an operational role. Since 1967, Pratt & Whitney Canada had operated a CF-100 on loan from the Canadian Armed Forces to serve as an engine testbed for the JT15D small turbofan. PWC needed a two seat aircraft (the rear seat of the CF-100 being occupied by a flight test engineer) and one with sufficient ground clearance for an underslung nacelle for the JT15D engine.

The CF-100's ability to cruise up to Mach 0.8 as high as 48,000 feet made it ideal for testing an engine destined for business jets. The aircraft arrived at PWC's St-Hubert test center in November 1967 for conversion. The first flight took place on 22 July 1968 with the first flight with a JT15D engine on 14 August 1968. The first air start of the JT15D took place less than two weeks later on 22 August 1968.

The loan of the CF-100 got extended several times as PWC tested different versions of the JT15D engine, ultimately making over 400 flights totalling 1,017.6 flying hours with the test engines.

The JT15D engine is unique in that it has a centrifugal high pressure compressor which was common on early generation jet engines. However, in the JT15D it made the engine more compact and simpler in terms of complexity and parts as opposed to what it would have been had it used a traditional axial-flow compressor. The JT15D first went into use on the Cessna Citation 500 (later rebranded Citation I) and has been used on the Hawker Beechjet/T-1A Jayhawk, Aerospatiale Corvette, and the Citation II, Ultra, and Citation V as well as the military T-47 and UC-35 versions of the Citation.