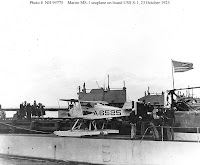 Following General Billy Mitchell's dramatic demonstration of airpower in July 1921 with the sinking of the captured German battleship Ostfriesland by Martin MB-2 bombers, Rear Admiral William A. Moffett ordered that the US Navy expeditiously get aircraft on its battleships and get aircraft carriers as quickly as possible. Within a year of Mitchell's bombing demonstration, Moffett had organized the Bureau of Aeronautics (BuAer) with himself as its first chief. In the first ten years of BuAer's existence, the Glenn L. Martin Company would produce over 400 aircraft in over a dozen different types from scouts to patrol bombers. The first contracts for experimental aircraft to expand the Navy's aerial reach were awarded in 1922 and in 1923 Admiral Moffett and BuAer were even wanting a scouting aircraft for submarines.

The Martin MS-1, a submarine observation aircraft, was one of the more unusual designs of its day and one of the rarest of Navy aircraft. Measuring in right at seven and a half feet in height, the float-equipped biplane was only seventeen feet long and had a removable wing only eighteen feet in wingspan. A three-cylinder radial engine powered the MS-1 to top speed of 100 mph. It was rolled out on 17 April 1923 at Martin's Cleveland, Ohio, plant.

At sea, the submarine would surface underneath the alighted MS-1, lifting it up out of the water. The wings were then removed and stored with the scout plane in a watertight compartment on the deck. To launch the MS-1, the procedure was reversed. The Navy bought six MS-1 scouts.

Source: Raise Heaven and Earth- The Story of Martin Marietta People and Their Pioneering Achievements by William B. Harwood. Simon and Schuster, 1993, p99-102.
at 22:02