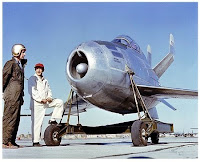 In 1944 the USAAF launched the MX-472 project to examine possible solutions to giving long range intercontinental bombers like the Convair B-36 the necessary fighter escort. As air-to-air refueling wasn't in common use and there were concerns about pilot fatigue on a mission that might last up to 30 hours, the USAAF decided in 1944 that the bomber itself would have to carry its own "parasite" fighter. However, the Army Air Forces found that none of the established manufacturers of the day were interested in the project.

In St. Louis, the USAAF approached Curtiss-Wright but found them less than receptive, in the words of one engineer at Curtiss "they didn't need the aggravation". However, across town, a more obscure company led by James S. McDonnell was willing to take a risk. Having only built Fairchild AT-21 Gunner trainers under license and the failed XP-67 Moonbat fighter, McDonnell had little to lose. However, in negotiating with the Army, James McDonnell would only proceed with the parasite fighter project only if the Army would give him a contract for a conventional jet fighter in exchange. After much discussion, the Army relented and McDonnell began work on the McDonnell Model 27 which would become the XF-85 Goblin in the postwar period.

McDonnell hired away one of Curtiss-Wright's most promising designers, Herman Barkey to work on the Model 27. Having had key roles in the Curtiss Helldiver and C-46 Commando aircraft, Barkey would go on to lead roles in not only the XF-85 but also on the F2H Banshee, F3H Demon, F-4 Phantom II and the aircraft that was given to McDonnell as a quid pro quo for the Goblin project- the XF-88.

While it performed well in testing and evaluation, the nascent US Air Force changed to specifications that led to the XF-88 leading to it not being adopted by the service as previously agreed with James McDonnell. However, Barkey would further develop the XF-88 design to a larger and more capable aircraft as the F-101 Voodoo.