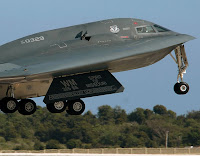 According to Irv Waaland, one of the founding engineers who formed the initial design team for the B-2 Spirit in the late 1970s, what the YB-49 provided the B-2 design team was a "feasibility establishment"- the first B-2 configuration studies had vertical tails as part of the flying wing design. But in an era of powered controls and digital flight computers, the B-2 team realized that they could get rid of the vertical tails (which dramatically reduced the RCS of the B-2) as their study of the YB-49 program showed that it had small vestigial vertical fins (smaller than what the initial B-2 configuration studies had, actually) and that was in a day before digital flight control technology.

Because of the unique flying characteristics of the flying wing configuration, Irv Waaland and his team of engineers extensively interviewed the engineers from the YB-49 like William Sears and Irv Ashkenas as well as the chief test pilot in those days, Max Stanley (he had flown the XB-35, the prop-driven antecedent of the YB-49, on its maiden flight).

In fact, Max Stanley was cleared for the B-2 program which was one of the most classified programs at the time. He often flew the flight control simulator and provided input to the design team which saved them extensive time and effort. In one area in particular, the wind tunnel studies of the B-2 suggested that the ground effect would make it difficult to land the B-2 and the engineers were preparing to create a second flight control configuration for the B-2's flight computers that would kick in on landing to overcome this perceived issue.

When this issue was brought to Max Stanley's attention, he had indicated that there were similar fears about the XB-35/YB-49 and that as his impressions in the B-2 sim were that it flew very similarly to the YB-49, he assured the engineers that the B-2 would land just fine. He had convinced the design team to leave out the alternate flight control configuration and sure enough, when the B-2 made its maiden flight in July of 1989, the stealth bomber landed just as Max Stanley had predicted.