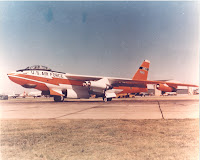 With the expansion in the numbers of jet-powered military aircraft in the USAF as well as the other branches of the military in the 1950s, concerns were raised about the flow control of high-performance jet aircraft with slower civilian piston traffic in the airways system. The Strategic Air Command alone in 1955 operated over a thousand jet aircraft. The USAF's Airways & Air Communications Service, in charge of all Air Force navigation and communications facilities, expressed concern that without the development of new control procedures, airways and navaids, it would be like inadequate highways being paired with modern automobiles.

As the Civil Aeronautics Administration (the FAA's predecessor) had no jet aircraft capable of performing the flight check role, the task was assigned the USAF AACS. In what became known as the High Altitude Project, both CAA and USAF navaids and procedures were to be evaluated using Boeing B-47 Stratojets. The objectives of the project were to evaluate ATC procedures, determine the capabilities of navaids at high speeds between 20,000 to 40,000 feet and develop new high altitude control procedures. The Douglas C-47s and C-54s then operated by the CAA would conduct the low altitude flight checks as they had been doing since the Second World War.

Between 1955 and 1962 B-47s based at Tinker AFB, Oklahoma, were fitted out with the necessary flight check equipment for the High Altitude Project. In 1963, Lockheed C-140 Jetstars would replace the Stratojets in the flight check role.