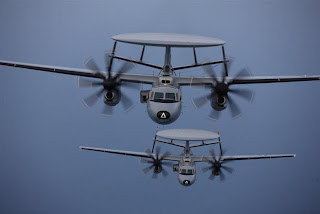 Some planes are like the Rodney Dangerfields of aviation- they just don't get any respect. If there's one plane that I think of in that regard, it has to be the Grumman E-2 Hawkeye. Development began on the Hawkeye in 1956 as a replacement of the Grumman WF/E-1 Tracer as the "eyes" of the carrier battle group. The first E-2A Hawkeyes entered fleet service in 1964 and were a quantum leap over the early E-1 Tracer. Since then, Grumman (and now Northrop Grumman) have made continual refinements to the E-2 Hawkeye's systems that while the external appearance of the aircraft hasn't changed significantly, the radar systems are far more advanced than what went to sea in 1964.

The needs for both overland/littoral as well as oceanic surveillance have resulted in the AN/APY-9 radar being a unique hybrid of an electronically-scanned unit inside the rotodome that also was mechanically scanned by rotating the entire unit as well. The radar couldn't be a true AESA (active electronically scanned array) due to weight and space limitations for a carrier-borne aircraft. The transmit and receive equipment for the new radar are located in the fuselage and connect to the antenna in the rotodome via a high power RF coupler. As a result, the rotodome can rotate and be locked down to focus on a specific threat sector as the Navy's primary requirement for the new system was for theater ballistic/cruise missile defense. The new radar compared to the AN/APS-145 of the E-2C has a staggering 300% increase in the volume of sky it can search.

Interestingly the data systems on the new version of the Hawkeye are based on commercial off-the shelf (COTS) technology with a fiber optic local area network (LAN) using commercial Ethernet standards and a mission computer running Linux. This was done to facilitate future upgrades which, in essence, could be done with the ease of computer infrastructure upgrades in the consumer world.

The external appearance of the E-2D Advanced Hawkeye is essentially unchanged from the current E-2C, but the aircraft is 1,500 lbs heavier and as a result, a white triangle is painted on the nose ("delta" for the E-2D) as a recognition for the carrier LSOs that the arresting gear has to be set for a higher weight than other E-2 versions.

When the last E-2D Advanced Hawkeye is delivered to the fleet in 2021, it will have been an astounding fifty-seven years since the Hawkeye first went to sea in 1964! Maybe it doesn't get a lot of the attention and glory that the fast jets of the carrier air wing gets, but what might end up being 70+ years of service sure as hell gets my respect!