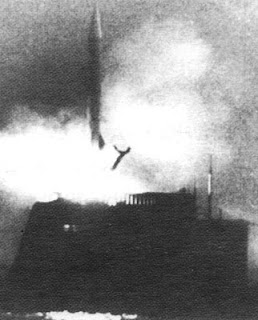 Early on in the postwar period both the United States and the Soviet Union realized the potential deterrent value of basing nuclear missiles on submarines. Both nations looked at derivatives of the German V-2 missile but in the United States development first focused on the use of cruise missiles on submarines but as a deterrent, the system was slow. Cruise missiles of the day flew no faster than the jet bombers and were thus prone to interception and the need to launch from the surface made the sub platform vulnerable to detection and attack.

In the Soviet Union, however, the nuclear-tipped missile in its various forms was seen by Premier Nikita Khrushchev as a way of leveling the playing field against the US military without the great expenditure of cost needed by large fleets of ships, aircraft and tanks. While sub-launched cruise missiles were developed, they came afterwards and as an insurance on the missile development. Several days ago I talked about a secret precision-guided version of the Russian Scud missile. What's little known about the Scud is that it was also the Russian's first sub-launched ballistic missile (SLBM). In fact, the operational deployment of the SLBM version of the Scud, designated the R-11FM, was the first operational deployment in the world of an SLBM when it went to sea in 1956, five years before the American Polaris A-1 SLBM went to sea aboard the USS George Washington.

As the Russians were quite aware of the start of the development of the Polaris in the mid-1950s, time was of the essence in fielding an operational SLBM and the Scud was selected for adaptation rather than use an all-new design. As the American George Washington-class ballistic missile submarine was based on a stretching of the Skipjack attack submarine, the Russians similarly stretched the Project 611 attack submarine (NATO code name Zulu) into the 611AV. As the missile was too long to enclose in the hull, the sail of the submarine was stretched to hold two launch tubes that held the missiles which extended from the hull and into the sail.

Word began in 1954 and the first technical hurdle was how to launch the missile from underwater. As the R-11FM system was intended to be an interim option, this hurdle was deferred to the next series of missiles under development. So for the time being, the R-11FM would be launched from a surfaced submarine. The missile would be elevated out of its launch tube and then fired.

The second hurdle was how to launch the missile when the submarine was moving due to sea motion. As the land-based Scud had to be aligned a certain direction for launch, the sub-based version was mounted on a launch table that was gyroscopically stabilized in three axes similar to what was done for battleship turrets (in fact, the stabilization system was designed by a naval artillery design bureau in Leningrad). Once launch was commanded, the system would only fire the missile if the stabilized table was in the proper position.

In the fall of 1954 a series of test launches were made from ground-based test platforms and on 16 September 1955 the world's first submarine-launched ballistic missile launch took place in the White Sea. After further testing, the R-11FM and the Project 611AV submarines became operational with the Northern Fleet in 1956 and the Pacific Fleet in 1959.

The system was abysmal, to say the least. Poor quality control and the need to carry the hypergolic fuels for the R-11FM led to numerous accidents and launch failures. The CEP of the missile was an atrocious 7 kilometers (meaning that 50% of the time the missile would hit inside a 7km circle) compared to 1-2 kilometers for the land-based version. The 611AV submarine had to maintain a steady course, depth and speed for 2-4 hours before launch for the launch system to properly align and once surfaced, it took five minutes to launch the first missile and another five minutes for the second missile to be fired.

The Soviet Navy was very reluctant to take the missile into service, but pressure from Premier Khrushchev and the defense minister, Dmitri Ustinov, resulted in six 611AV submarines going into service with the R-11FM. The rationale was that while impractical and cumbersome, it was the first step in getting practical experience of launching missiles at sea.