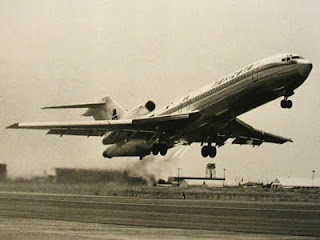 I've always had a soft spot for the Boeing 727. Maybe it was all those flights as kid growing up in the Midwest where we'd board a Braniff Flying Colors 727 out of Wichita and head off to different parts of the country back in the day when you flew Braniff north or south out of Kansas to interline with different airlines to head to the East Coast or West Coast. Flights to the south usually interlined with Continental or American and flights to the north interlined with United, sometimes TWA if I remember right from my youth. But even those flights were 727s, too, and then one day all of a sudden it seems, sometime after September 11, the 727s were all put out to pasture by most of the US majors. I could go on and on (but thankfully won't) on why I think the 727 is the Chuck Norris of jetliners, but suffice to say for today's aviation trivia there's just one feature, though not unique to the 727, adds to that coolness for "Trisaurus Rex".

There was a JATO option. That's right. Rocket assisted takeoff. What a shame it wasn't picked up by everyone else, but it was an option on the 727-200 which of course was a lot heavier than the shorter 727-100. Until the 727-200 Advanced came along and included JT8D engines if increased power, the early 727-200s were a bit short on the power stick due to the heavier weight but essentially the same engines as the -100s.

Now don't everyone write me, I know the reasons why the JATO option didn't roll out across the board for most production 727-200s. There were only 12 727-200s that were built with the JATO provision and they were actually the more powerful 727-200 Advanced versions. Mexicana was in a unique position of serving several high-altitude airports in its network where the 727-200 as built would have been payload restricted to account for the possibility of the loss of one of the three engines at takeoff.

As a side track to illustrate that point, at airports at higher elevations, particularly on hot days, wings will generate less lift and jet engines will develop less power than at a lower elevation airport. That's why the runways at airports like Denver or La Paz, Bolivia, are so long. In fact, back in the 1970s many US airlines didn't sent the 727-100QC variants to Denver Stapleton Airport as the heavier structural reinforcing of the main deck to handle cargo loads cut into the passenger payload during the summer months.

Mexicana took delivery of twelve 727-200s that got around this limitation by having a JATO installation in the lower aft fuselage just behind the wings. These aircraft could be identified by having a shallow dorsal fairing ahead of the #2 intake that accommodated some of the rerouted avionics and air conditioning ducting that was displaced by the JATO provision. There's a misconception that this fairing is a reinforcement brace, though.

The aircraft were unofficially designated 727-200/JATO by Boeing and the rocket installation was intended for emergency use only when flying out of a hot and high airport at maximum gross weight. Without the JATO, the aircraft would have to be payload restricted to account for the need to reach a safe altitude in the event of an engine loss after committing to takeoff. By having the JATO provision, Mexicana could operate its 727-200s at full payload. In the event of a loss of engine at past V1, the JATO unit would fire and allow the heavily-laden jet to reach a safe altitude and get aerodynamically cleaned up.

The JATO provision was eventually made obsolete by later developments in the JT8D engine that featured APR- automatic power reserve. It sensed a power decrease from one of the engines failing on takeoff and automatically boosted the power to the remaining two engines by a significant margin.