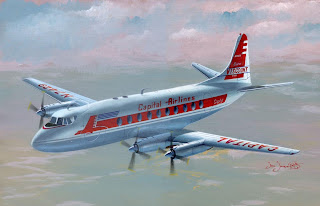 It was a moment that not even Boeing, Douglas, or Lockheed could have envisioned taking place. In June 1955 in one of Capital Airlines' hangars at Washington National Airport, Patricia Nixon, wife of the US vice-president Richard Nixon, christened Capital's first Vickers Viscount, N7402 as Capital's president, Slim Carmichael and an enthusiastic crowd of dignitaries and employees looked on. In 1955 Capital was already an industry leader despite being only the fifth largest airline in the United States. It was the first airline to introduce low-fare no-frills services to the United States with its nightly "Air Coach" services that started in 1947, flying aircraft that otherwise would have sat unused at night waiting for the daytime regular full-fare services.

The introduction of the Viscount on Capital's network on 26 July 1955 between Washington DC and Chicago marked the first US scheduled turbine passenger services and it was on an aircraft that wasn't built in Seattle, Long Beach, or Burbank. Vickers pulled off a sensational coup with the Capital sale and at the time, the order for sixty Viscounts represented the largest single post-war dollar sale for Great Britain, worth $67 million. BEA was even talked into giving three early delivery spots to allow Capital to the first to operate turbine services in the United States with the Viscount. BEA and Vickers invested heavily in getting Capital prepared to operate the Viscount.

But it would all come crashing down for Capital only six years later. Three factors would lead Capital to financial ruin and eventual merger with United Air Lines in 1961, but none of them were attributable (contrary to popular belief) to the performance of the Viscount itself. The first one was that Capital's route network consisted of many smaller communities and routes that were too short to be economical for the Viscount. Secondly, increasing competition from airlines like United that were introducing pure jets on the same longer range routes that were ideal for Capital's Viscounts resulted in their planes being flown faster to try to match the block times of the jets. As a result, maintenance costs on the aircraft and particularly the engines, increased dramatically as the aircraft were being pushed harder. Adding to the airline's woes were the crashes of four Viscounts between 1958 and 1960 that brought press attention to the airline's problems.

By 1960 Capital owed Vickers $34 million in outstanding payments on the Viscounts and they had to go to US court to file suit. Vickers was persuaded to take back 15 of the Viscounts while Capital came up with a restructuring plan that centered around ordering modern jet equipment in the form of the De Havilland Comet 4B while they successfully petitioned the Civil Aeronautics Board to gain more nonstop route authorities in their network and drop some of the more unprofitable destinations.

Unfortunately it was too little too late as Capital's large 1954 order for sixty Viscounts resulted in increasing interest payments that left the airline little financial flexibility. However, stoked by the press, the general public gained the impression that it was the Viscount itself that was causing Capital's problems when in fact their Viscounts were operating at an 80 percent load factor compared to 58% for the other types in the fleet. Break even on the Viscount for Capital was only 52%, so the aircraft was clearly a money maker for Capital, but it wasn't enough to stave off the large growing debt obligations from the large sixty aircraft order. On 1 July 1961 Capital's operations were merged into that of United Air Lines, but in a show of the aircraft's soundness, United retained the Viscounts in its fleet and even recalled some of the aircraft that Capital had returned to Vickers.
Source: Vickers Viscount and Vanguard by Malcolm L. Hill. Crowood Press Ltd, 2004, p40-48, 97-99.
at 16:53