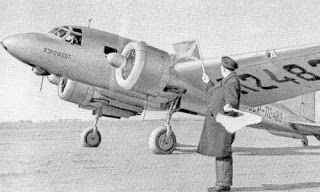 As the pace of technological improvements in aviation march forward, sometimes promising aircraft designs get shafted by rival designs that offer more of something- more speed, more payload, more range or just plain more of everything. The lucky ones amongst the short-shrifted go into limited production like the Bristol Britannia or the Convair 990. Some only fly as prototypes like the Avro Canada C102 Jetliner. And most never make it off the drawing boards like the Douglas C-132. Most of the ones that go into even limited production are noted by history- but there are some aircraft designs that despite that, are nearly forgotten to aviation history.

One of those aircraft was the ANT-35 from Andrei Tupolev's design bureau in the interwar period of the 1930s. The beginnings of the ANT-35 started out rather unusually in a contest held in May 1934 in the magazine "Za Roolyom" (At The Wheel) and chaired by the Aviation Research Technical Society (Avia-NITO). The contest called for a high-speed airliner in both single- and twin-engine categories that were to have a speed of 400-450 kilometers per hour, a range of 1,250-1,500 kilometers, a cruising altitude of 7,500 meters and able to carry five to twelve passengers with their baggage. Several dozen designs were submitted to the magazine and while none were actually built, the contest influenced the design of future Soviet airliners.

Andrei Tupolev didn't participate in the contest but he had been watching it from the sidelines and decided to go ahead in August 1935 and build an aircraft to the outlined specifications. To save time and get his design into production as soon as possible, a new passenger-carrying fuselage was mated with the wings, tail, and undercarriage of the Tupolev SB (ANT-40) light bomber. To insure a high speed, special attention was paid to the fit and finish of the components to insure a smooth external line (in contrast to most Soviet designs of the day which were decidedly "rougher") for drag reduction. Two license-built French Gnome-Rhone 860-horsepower Mistral radials were used for the engines. The cabin was heated and fully-soundproofed with ten reclining passenger seats as well as individual ventilation and lighting for each seat- keep in mind that was something that wasn't standard in airliners until the start of the jet age in the 1950s- and this is 1935- in the Soviet Union, no less! Compared to other contemporary Soviet aircraft, the ANT-35 was also lavishly-equipped with a full avionics fit including autopilot, radio equipment and navigation gear.

Tupolev made sure all of the latest in aviation technology was included in the ANT-35- from close-fitting NACA cowlings on engines, oil coolers submerged in the wing roots, hydraulically-operated flaps, even rubber shock-absorbers on the engine mounts. He had every intent on making the ANT-35 not just the fastest airliner, but also the most comfortable and advanced airliner flying.

The first flight of the prototype ANT-35 was made on 20 August 1936 and at normal gross weight it easily cruised at 390 kilometers per hour, making it one of the fastest airliners of the day. The main deficiency noted on the prototype was the lack of headroom in the cabin but it was otherwise an extremely satisfactory design in the opinion of the test crews. The second prototyp,e designated the ANT-35bis, incorporated a cabin with 15 centimeters of more headroom and more powerful license-built American 1,000-horsepower Wright Cyclone radial engines. The improved version flew in late 1937 and served also as a pattern for production of what was to be designated the PS-35 airliner.

Large scale production eluded the ANT-35/PS-35, though. At the same time, the Soviet Union obtained a license to produce the Douglas DC-3 as the Lisunov Li-2 (also designated PS-84) with the same engines as the ANT-35. Although Tupolev's design was much faster, the DC-3/Li-2 could carry more passengers and cargo over a longer range and as a result, Aeroflot and the Soviet Air Force only took delivery of 9 ANT-35 airliners total. Before the outbreak of the Second World War, the ANT-35 was used on the Moscow-Prague and Moscow-Stockholm routes but in 1941 were shifted to high-priority express flights between Moscow and the cities of Lvov and Odessa. During the war the dwindling number of ANT-35s capitalized on their high speed to deliver supplies to partisans in the German rear flanks as well as medical and food supplies to encircled Red Army units. The last aircraft was retired from service in 1944 to fade into obscurity, eclipsed by the Douglas DC-3 and the many variants Lisunov built that were unique to Soviet service.

Source: OKB Tupolev: A History of the Design Bureau and its Aircraft by Yefim Gordon and Vladimir Rigmant. Midland Publishing, 2005, p64-66.
at 20:18