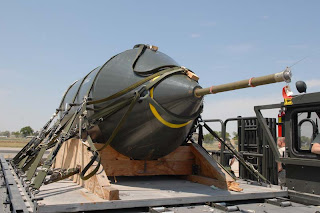 Although the role of the Lockheed C-130 Hercules in Vietnam was primarily that of airlift, one of the most common non-airlift roles it flew was that of a bomber- dropping the large, 15,000-lb BLU-82/B "Big Blue 82" bombs. Following the end of the Second World War the United States did have some bombs in the 10,000-lb class and higher which were dropped by Convair B-36 Peacemaker. They weren't extensively deployed, let alone used, as the B-36's primary mission in the 1950s was that of nuclear deterrence. As the war in Vietnam intensified, the Air Force Systems Command returned to the idea of a large air dropped bomb not as a weapon, but as a rapid combat engineering tool to clear out a helicopter landing zone in the jungle. The B-36 was no longer in service and the B-52's pylons and bomb bay systems weren't designed for the type of weapon the AFSC was considering. One option looked at using the Army's Sikorsky CH-54 Tarhe skycrane helicopters, but the choice eventually settled on the C-130 Hercules due to its speed and range over the CH-54.

The project was designated Commando Vault with the first test drops being conducted in October 1968. The first Commando Vault bombs were the smaller M121 series which weighed in at 10,000 lbs. They were filled with what was called GSX- gelled slurry explosive, a mix of ammonium nitrate, aluminum powder and a liquid gelling agent. GSXs were standard explosives in the mining industry. They were cheap and easily handled, mixed prior to each mission as the mixture tended to be come unstable with time. There is a big misconception that these bombs were fuel-air explosive weapons and they weren't for the simple reason that GSX is a completely inappropriate explosive for FAE applications as it had the consistency of mud and couldn't be aerosolized for an FAE weapon.

The first combat drops were made in Vietnam in March 1969 from the C-130 Hercules. The bomb was carried on a pallet-mounted cradle in the cargo hold and an extraction parachute pulled the load out the rear ramp. The bomb then separated from the cradle and it's own parachute deployed to stabilize it. An extended fuse probe nicknamed the "Daisy Cutter" triggered the bomb before it hit the ground, thereby clearing the trees but not leaving a crater which would preclude the use of the site as a helicopter landing zone. In 1970 a larger version was put into use, this one designated BLU-82/B and it weighed in at 6.8 tons and was about 80% explosive by weight. Also filled with GSX, the BLU-82/B was also dropped by the C-130 and also had a 4-foot stand-off fuse probe that for whatever reason, got the bomb the nickname "Daisy Cutter" when in fact the term "Daisy Cutter" referred to any extended nose probe fuse used on bombs during the conflict.

Accurate drop of the Commando Vault weapons required precise navigation and some of the drops in Vietnam were made using radar guidance as well as the MSQ-77 Combat Skyspot beacon guidance method that was also used to control the B-52 Arc Light drops over South Vietnam. One minute before the drop, the extraction parachute on the cradle of the bomb was deployed into the airstream out the open ramp while the pallet was restrained by the locks in the cargo rails in the C-130's cargo hold. At the release point- usually from a navigator on the flight deck or a ground radar beacon operator in the case of Combat Skyspot- the loadmaster released the locks, dropping the weapon. This also had the unique distinction of making the Commando Vault loadmasters the only enlisted men in Vietnam to deploy aerial weapons!

The minimum altitude for a drop was about 6,000 to 7,000 feet and even at that height, it wasn't unusual for the Hercules to be buffeted by the shockwave of the explosion. In Vietnam, about 200 of the smaller M121 bombs were dropped and about 250 of the larger BLU-82/Bs were dropped. In Desert Storm, the BLU-82/Bs saw action again as being very useful for clearing out large swathes of desert where the Iraqis had placed minefields to stall the Coalition advance. They were also a useful psychological weapon that were typically accompanied by leaflet drops on Iraqi units in the area. On the first night of the ground offensive, the first BLU-82/B drop was mistaken for a tactical nuclear weapon by some of the Coalition units in the area! Eleven BLU-82/Bs were dropped during Desert Storm.

The BLU-82/B was used again in Operation Enduring Freedom in Afghanistan, approximately 3-4 of them being used to hit some of the cave complexes where the Tailban forces were holding out. The last BLU-82/B drop was a test drop in Utah in 2008, the bomb having been since replaced by the more accurate MOAB- GBU-43/B Massive Ordnance Air Blast weapon, also deployed by the C-130 Hercules.