Development of the Harrier Ski-Jump 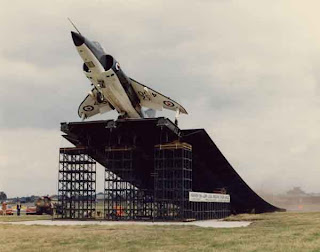 The development of the BAe Sea Harrier FRS.1 and the ski-jump are closely intertwined and the discussion one almost always leads to the discussion of the other. Hawker-Siddeley Aircraft, one of BAe's predecessor companies, had studied a naval Harrier variant as far back as 1969 as the P.1184 Maritime Harrier. When the Royal Navy awarded HSA a contract for naval Harrier variant in 1972, financial austerity was the watch word of the day in the British government and though based in part on the P.1184 Maritime Harrier, what would become the Sea Harrier FRS.1 would be a far less radical departure and minimum-change version of the land-based RAF Harrier GR.1.

In 1973 Royal Navy Lt. Commander David Taylor first formulated the ski-jump concept for V/STOL aircraft in the same class as the Harrier. His work was further developed in cooperation with the Hawker's Kingston division and the Ministry of Defence in sophisticated computer models followed by actual flight testing with an adjustable ski-jump built by HSA at the Royal Aircraft Establishment's main testing facility at Bedford.

One of the ski-jump's biggest proponents was John Farley, HSA's chief test pilot for the Harrier and Sea Harrier programs. During his test flights with early Harrier GR.1s off the aircraft carrier HMS Hermes, he found that there were certain moments in the pitching and heaving of a carrier deck in rough seas that could play havoc with a fully-loaded Sea Harrier making an STOL run off the carrier deck. In fact, tests had shown that in some sea conditions, as little as 5 degrees of deck angle up or down either at the stern or bow could shut down flight operations completely.

Farley also noted that in a pitching carrier deck, the most stable point to land in VTOL mode was the center of the deck as the ship virtually pivoted about that point in rough seas. Ideally, a fully-loaded Sea Harrier without a ski-jump would need the full-length of the deck to take off, but this meant that launching and recovery flight operations couldn't be simultaneously undertaken. Testing with the ground-based ski-jump at RAE Bedford showed that a shorter takeoff run would be needed, allowing the forward half of the deck to be used for launching aircraft off the ski-jump and from the midpoint back used for recovery of Sea Harriers.

Farley himself made the first takeoff from the ski-jump at RAE Bedford on 5 August 1977 with the sixth production Harrier GR.1. The first series of tests had the ramp set at 6 degrees, then moved it up to 12 degrees and then finally to 20 degrees. With the ramp at its steepest 20 degree setting, Farley could get a Harrier airborne with as little as 42 knots of airspeed as the ramp provided a significant upward velocity vector that allowed the pilot time to pivot the nozzles back, clean up the aircraft and depart in nearly all but the worst sea conditions. In addition, should an emergency occur on takeoff from a ski-jump, there was valuable time to either jettison the stores or eject.

Testing further showed that the ski-jump reduced required wind-over-deck speed. As the upcoming Invincible class "Harrier carriers" were gas turbine powered, not needing higher speeds to achieve ideal wind-over-deck speeds meant a more inexpensive and less powerful powerplant would be needed for the ship, an added bonus in the atmosphere of financial austerity of the day.

It was also found that as the aircraft reached the ski-jump, there was a rapid increase in loading on the undercarriage and as a result, the design of the Sea Harrier was modified to incorporate structural reinforcement around the aft main undercarriage just below the blast deflectors of the aft nozzles.

The trials at RAE Bedford were tremendously successful and a 7 degree ski-jump was added to the already-completed HMS Invincible and to the HMS Illustrious. The lower-than-ideal angle was due to the presence of the forward Sea Dart SAM launcher on the bow. The last ship of the class, HMS Ark Royal, wasn't finished until 1985 an as such, it got a 40-foot deck extension and a 12 degree ski-jump, allowing it to launch a fully-loaded Sea Harrier. In 1986 the Invincible and Illustrious had their ski-jumps refitted to the same standard as the Ark Royal. In addition, when the HMS Hermes underwent its refit in 1979 from an assault carrier to one compatible with the Sea Harrier, it got a 12 degree ski-jump as well. The ski-jumps were crucial to Harrier GR.3 and Sea Harrier FRS.1 operations in the Falklands campaign in 1982.

The sea trials for the Sea Harrier FRS.1 began in October 1979 aboard the HMS Hermes and the first operational sea deployment took place in May 1980 aboard the HMS Invincible.

TAILS THROUGH TIME now has its own URL at www.tailsthroughtime.com! The previous URL of aviationtrivia.blogspot.com still works and will redirect you to the new URL. You may see those redirects within article links that connect to past articles.