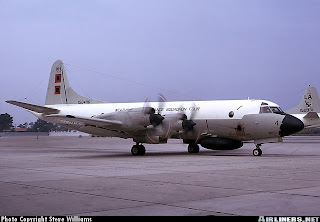 Navy Weather Reconnaissance Squadron FOUR (VW-4), based out of NAS Jacksonville, Florida, for many years was responsible for the Navy's contribution to the hurricane hunting effort shared with the US Air Force and the Department of Commerce. For most of VW-4 history it flew the Lockheed WC-121N Warning Star, a veersion of the EC-121 airborne early warning version of the Lockheed Super Constellation. While not one WC-121N was ever lost on a hurricane hunter mission, by 1969 the Navy was looking at replacing the venerable old bird with a more advanced weather reconnaissance aircraft.

During the 1969 Atlantic hurricane season, Hurricane Inga formed near the Lesser Antilles and an unusual combination of weather factors had the hurricane wandering in two loops south of Bermuda (Inga would last 25 days, becoming the 4th longest lasting Atlantic hurricane in history). The Navy took the opportunity to perform a unique fly off of two candidate replacement aircraft along with the existing WC-121N Warning Star. They flew a Lockheed C-130 Hercules, a Lockheed P-3 Orion, and a Lockheed WC-121N Warning Star (Huh! All Lockheed products, too. Go figure.) in trail formation on repeated penetrations of the eyewall of Hurricane Inga. Fifteen miles separated each aircraft from the next aircraft in the formation as over twenty low-altitude penetrations were made into the eye. A multitude of factors were evaluated from propulsion systems, flying qualities and general handling in the severe turbulence of the eyewall as well as the structural integrity and payload capacity. The working environment was also taken into consideration considering the long flights that were a routine part of hurricane hunting.

Although both the C-130 and P-3 did well in the evaluation flights into Hurricane Inga, the Navy selected the P-3 Orion as the next Hurricane Hunter. Interestingly the USAF has been using the C-130 since 1960 for the hurricane hunting mission.

Existing P-3As were taken from the Navy maritime patrol fleet and stripped and reworked at Lockheed's Ontario, California, facility. All the ASW and sensor systems were removed and a weapons-bay mounted APS-20 radar was installed with a large M&M-shaped radome (and thus called the "M&M radome"), structural strengthening of the wings and a whole host of meteorological data-gathering sensors. The new WP-3As also had dual INS, Doppler and Omega navigation systems, one of the most extensive and advanced systems to be installed in an aircraft at the time. The interior layout remained essentially the same as that of the fleet P-3 Orions with the operator consoles reconfigured for weather research and data gathering.

The new WP-3A's first taskings with VW-4 were with Project Stormfury, a long running joint Department of Defense/Department of Commerce research project into cloud seeding of hurricane storm bands in an effort to attenuate the storm's intensity. Though the results were inconclusive, the idea of the military being involved with weather modification became a political hot potato with accusations by uninformed quarters of the "weaponization of weather". The WP-3As also participated in polar ice reconnaissance and winter storm studies on the US East Coast. In addition, the WP-3As were also deployed overseas to provide weather support and research for fleet operations.

In late 1974 as the result of post-Vietnam budget cuts, the Navy announced the closing down of VW-4 and its hurricane hunting mission which became official on 30 April 1975 and the WP-3As were pulled out of service and demodified for other roles. The military's contribution to hurricane hunting would be handled entirely by the USAF in cooperation with the National Oceanic and Atmospheric Administration (NOAA). Ironically, NOAA took delivery in 1976 of two even more highly-modified Lockheed P-3 Orions designated WP-3D which were even more advanced the Navy's WP-3As and still serve to this day.