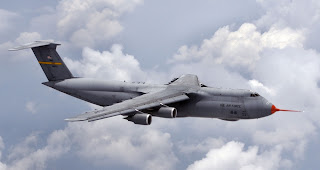 The first production group of Lockheed C-5 Galaxy transports, designated the C-5A, were built in the 1970s and even then, there were issues with the jet's reliability. When the production line was reopened during the Reagan-era defense buildup in the 1980s, the C-5B was produced to introduce a variety of systems improvements aimed at boosting the jet's reliability. But the mission capable rate of the Galaxy continued to decline. In the mid-1990s, of the 126 C-5A/Bs in service at the time, up to 32 percent of them were down for maintenance at any one time. Of all the aircraft operated by the Air Mobility Command of the US Air Force, the C-5's mission capable rate was the worst, even worse than the 1950s-1960s vintage KC-135 Stratotankers! In 1998 the USAF initiated the AMP (Avionics Modernization Program) which improved many of the cockpit and traffic management systems of the aircraft. Despite this, the mission capable rates continued to deteriorate. By 2001, only 60% of the Galaxy fleet was operational at any one time. The airlift buildup for Operation Enduring Freedom in Afghanistan initially turned things around as increased funding for C-5 maintenance to operate the logistics air bridge to Afghanistan raised the mission capable rate to 75%. But the pace of airlift missions eventually took their tool on the Galaxy- there are reports of one operating location that was allotted ramp space for eight C-5s to be present and the unspecified base had twenty-two C-5 aircraft present, down for maintenance issues! The 2009 troop surge into Afghanistan further strained Galaxy operations with aircraft down for maintenance a fixture on the ramps at Ramstein AB in Germany and NAS Rota in Spain. Personnel joked that AMC stood for "Airplane Might Come".

Two overlapping upgrade programs took place to improve the C-5's abysmal reliability. The first one was the aforementioned AMP (Avionics Modernization Program) that started in 1998 with the last Galaxy coming out of the program in August 2009, with 55 C-5s (50 C-5Bs, 2 C-5Cs, and 3 C-5As) having went through AMP. The second program was the bigger one and addressed the weak link the Galaxy today- it's elderly TF39 engines. The Galaxy's TF39 turbofan engines are the world's first production high-bypass turbofan engine. GE began development of the TF39 in 1965 and on today's unmodernized C-5 Galaxy, represents 40+ year old technology that has long been surpassed by modern commercial turbofan engines. To address this capability gap, Lockheed and the USAF began the RERP program (Reliability Enhancement and Re-engining Program) which began in 2006.

With the announcement that the USAF was to end procurement of the C-17A Globemaster III after 223 aircraft, the modernization of the Galaxy took on added importance. RERP is costly- it's estimated that what is spent on each C-5 going through RERP is equal to buying two C-17A Globemaster IIIs. When each C-5 is delivered to Lockheed's facility in Marietta, Georgia, the first task is to remove the elderly TF39 engines and any last remaining amount of fuel from the aircraft, after which it is moved into a special modification bay for 18 months where nearly 11,000 feet of wiring is pulled out of the aircraft and replaced with modern systems. The most challenging part and part of what makes RERP so costly is the re-engining with the modern GE CF6-80C2 engines. Because of the 30+ years of wear and tear on each Galaxy, a special laser system is used to determine the optimum location for the pylon fittings- in effect, each C-5 going through RERP gets custom-made engine pylons. 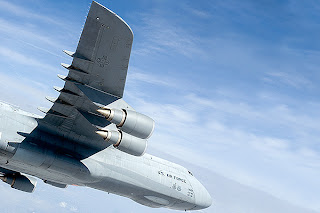 Ironically the GE CF6-80C2 engine that replaces the TF39s was derived from the TF39. Designed originally for the Douglas DC-10 and the Airbus A300, the current version of the CF6 is the CF6-80C2 which entered commercial service in 1985. The -80C2 engine powers the two latest versions of the A300 (the -600 version), the two versions of the A310, four versions of the 767 family, three versions of the Boeing 747-400, and the McDonnell Douglas MD-11. Although the basic engine architecture is the same, the CF6-80C2 is much more efficient and modern engine than it was over thirty years ago when it first came to market. What this does to the Galaxy is nothing short of impressive. The addition of modern engines gives the C-5M Super Galaxy 22% more thrust, a one-third shorter takeoff roll, twice the climb rate, and for a given payload, just over 1000 miles more range. And this is before getting into areas like meeting strict noise standards at many of the world's airports when the C-5M has to fly into and out of those locations.

The first Super Galaxy, tail number 86-0013, a C-5B, was rolled out on 16 May 2006 and made its maiden flight on its new engines the following month on 19 June 2006. Following a successful flight test program, the first two examples were delivered to the 436th Airlift Wing at Dover AFB, Delaware. This past summer two C-5Ms joined eight C-5A/Bs on a marathon airlift effort to delivery Army helicopters from NAS Rota (where they had been delivered by ship) to Afghanistan. The eight older Galaxy transports accounted for 23 missions altogether, while the C-5Ms by themselves accounted for 22 missions! Despite having flown one less mission, the two C-5Ms accounted for 55% of the cargo delivered during that operation and boasted a mission capable rate of 96%, something that the Galaxy has never attained in its operational history previously.