Tactics Over Technology: The Thach Weave 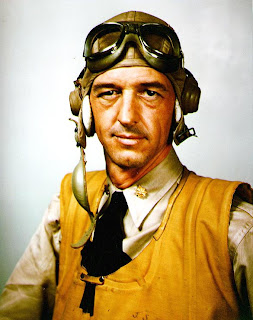 One little known aspect of the June 1942 Battle of Midway was that it wasn't just the turning point in the Pacific War that started to roll back the Japanese Empire, but it also was a turning point in fighter tactics that changed the way air combat was conducted. At the start of the Second World War, US Navy fighter squadrons had eighteen aircraft that were divided into six sections of three planes each- each section was composed of a flight leader and two wingmen. However, well before the attack on Pearl Harbor, the Navy fighter squadrons VF-2 and VF-5 experimented with two-plane sections with a flight leader and a single wingman. In a three-plane section it was found that the wingmen tended to focus too much on formation keeping instead of being on watch for enemy aircraft. The shift to a two-plane section with the wingman staggered and below the lead's altitude lessened the need for strict formation keeping. As a result, the two-plane section became the basic unit of the Navy's fighter squadrons beginning in July 1941. Three sections then made up a division in the squadron for a total of six planes- in cruising, each of the three sections flew in trail, but nearing combat they assumed an echelon formation. Having the support of a single, more vigilant wingman improved the odds of survival particularly against the superior Mitsubishi A6M Zero fighter.
That summer, Lt. Commander John "Jimmy" Thach, commander of VF-3, was still stateside and undergoing conversion with the rest of his squadron in California from the troublesome Brewster F2A Buffalo to the more robust Grumman F4F Wildcat. While there, Thach had access to preliminary reports from the American Volunteer Group "Flying Tigers" in China on the phenomenal performance of the Japanese Zero, possesing maneuverability and a rate of climb well in excess of their new F4F Wildcat mounts. At the time Thach was already well-known to his men for using matchsticks on a table to come up with new tactical ideas for his aircraft. Now he was back to his kitchen table each night, playing with matchsticks trying to come up with a tactic to counter the exceptional maneuverability of the Zero. Thach's first conclusion was the standard three-section division was unsuitable. It was better to use just two sections with a total of four planes. But how to use them? Thach would deploy two sections of Wildcats flying abreast of each other at a distance that approximated the turning radius of the Wildcat. Because of their positioning abreast and at a distance, each section had a good view of the other section's six-o'clock position. When Zeroes engaged, they'd be forced to choose one section to attack and could be spotting by the other section. This is one key characteristic that set apart what Thach called his "beam defense position" from other similar weaving tactics- a commitment to be on lookout for the other section.

Once a section was attacked, the other section either signaled the other one or just turned in towards that section under attack. Once alerted, the section under attack turned towards the incoming section. If the Zero pressed its attack, it faced a head on attack from the incoming section and if it withstood that, it would find itself in a position with the incoming section having another firing pass as each section weaved in and out from each other. If the Zero broke off the attack, then it faced having the incoming section getting on its tail. Thach also considered that the weave could also work on with just a single section if one fighter was engaged, the other fighter in the section could set up the weave. Wanting to prove it worked, Thach decided to test his ideas with the pilots of VF-3. Four planes were to play the part of the defenders flying in two sections. Thach was one of them. Another group of squadron pilots would play the part of the attackers- in his tests, Thach selected his best pilot, future Medal of Honor winner Edward "Butch" O'Hare, to lead the attacking group. To simulate the performance advantage of the Zero, Thach and the "defending pilots" would limit their Wildcats to just 1/2 power while O'Hare and the attacking pilots would get to use the full power of their Wildcats. Instructed to attack from different angles and altitudes, O'Hare found that once the "defenders" set up the weave from their beam defense position, they always found themselves facing the guns of one section or the other irrespective of their performance advantage. 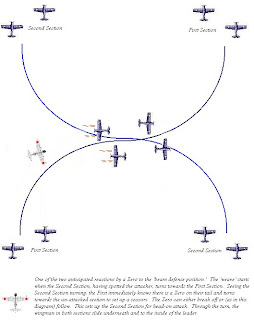 At the Battle of Midway, VF-3, led by Thach, were embarked on the USS Yorktown. Tasked with covering a group of plodding Douglas TBD Devastators, Thach was leading two sections at higher altitude. When the Devastators were jumped by Zeroes, Thach was unable to fly to their aid as his group had also been attacked by a group of Zeroes. In their initial firing pass, one of the four Wildcats was downed, but Thach had the remaining Wildcat set up a weave with his section. In short order, three Zeroes were shot down as the Zero pilots tried to aim on the weaving Wildcats and found themselves exposed to Thach and his men on repeated firing passes. Although Thach wasn't able to save the Devastators, the "Thach Weave" proved its worth in battle and word spread amongst Wildcat pilots that they now had a tool with which to fight the much-vaunted Zero.
Thach's tactical genius was recognized after Midway and later in the war developed what was called the "Big Blue Blanket" defense against kamikaze attacks which was a layered defense using round-the-clock combat air patrols of Grumman F6F Hellcats and Vought F4U Corsairs as far away as possible from the carrier to catch the kamikazes early. Fighter sweeps were conducted over Japanese airfields to prevent kamikazes from getting airborne, and destroyer radar pickets were stationed as far as 50 miles from the main carrier force. During the Korean War Thach commanded the carrier USS Sicily and then after the war, captained the USS Franklin D. Roosevelt. In 1959 he was assigned to the Navy's antisubmarine warfare development unit with the ASW carrier USS Valley Forge as his flagship. His contributions to ASW tactics were so significant he was featured on the cover of Time Magazine and the Thach Award was later established for the best ASW squadron in the Navy. The Perry-class frigate USS Thach (FFG-43) is named in his honor.
But he is best known for the Thach Weave and basic principles of the weave are still in use to this day in modern fighter combat. The Thach Weave was also used by Doulgas SBD Dauntless dive bombers in the Pacific- being much slower, the Dauntless were vulnerable to the Zero as well, but by employing the Thach Weave, the rear gunner of the Dauntless, having twin machine guns at his disposal, would have a much clearer shot at the attacking Zero during a weave.
Source: United States Naval Fighters of World War II in Action