Martin Bets on Orlando and Wins the Pershing Missile Contract 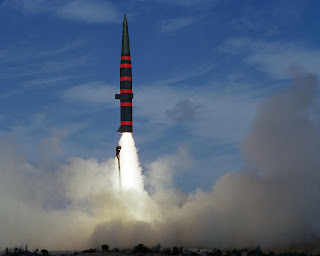 I had posted several weeks ago how George M. Bunker, the president of Martin Aircraft that succeeded Glenn L. Martin in 1952, diversified the company by getting into the missiles and rockets business. The year 1956 was a tremendous year for Martin, having won the Air Force's Titan ICBM contract as well as the Navy's Vanguard satellite launcher contract as well. With a major missile contract with the USAF, a major rocket launcher contract with the Navy, no one would have thought that Martin would get an upcoming Army contract for a medium-range ballistic missile. But then again, no one thought Bunker to be a betting man, either. At the time, the Army hadn't even issued a formal Request for Proposals to the industry for such a program. But early in 1956, Bunker paid a visit to Major General John Medaris, the commanding officer of the newly-formed Army Ballistic Missile Agency at Redstone Arsenal in Huntsville, Alabama. It was General Medaris who was the boss of German rocket scientist Werner Von Braun and his team of German engineers. The ironic aspect of the visit was that Bunker didn't stop by to solicit the Army's business. As General Medaris would recount the visit years later, Bunker simply asked "how might the Martin Company could best be of service to the Army's missile objectives." The general didn't offer any specifics on what the Army had in mind, but did point out to Bunker that it would be "extremely advantageous" to the Army if an aerospace company saw fit to have a production facility somewhere between Huntsville and Cape Canaveral Air Force Station, the primary test launch site for all US long-range missile programs. Bunker would thank the general for his time and departed.
Bunker decided that the best location would be Orlando, Florida, which in 1956 was a quiet banking town surrounded by orange groves and ranches. Most in the aerospace industry only knew of it as it was the nearest airport to Cape Canaveral one hour away. Many reporters, scientists, and engineers transited through Orlando on their way to and from the Cape. In August 1956 Bunker and one of his VPs called on the chairman of Orlando's largest bank, First National Bank, inquiring on the purchase of 500 acres for a manufacturing plant. Before the day was over, Bunker would be introduced to the mayor of Orlando, the head of the Orlando Industrial Board, and one of the city's prominent real estate brokers. A few days later, Orlando city leaders traveled to Baltimore to brief the Martin board of directors on candidate sites. Bunker directed the purchase of 6,400 acres at $200/acre. The site chosen was completely undeveloped and the Martin board asked about the need for roads, sewers, and utilities and that very same day not only did they secure the guarantee from the city leaders to provide all of what was needed, they also secured the support of the governor of Florida. Ground was broken five months later and in December 1957 Martin formally opened its Orlando facility to great fanfare. 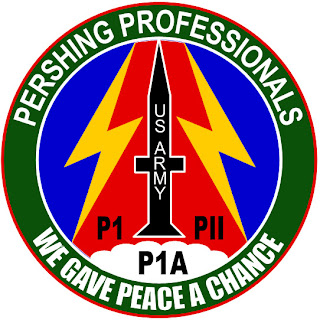 Mind you, Martin had yet to win any contract that would allow them to use that sprawling new facility! To bring their new missiles facility up to speed, several Martin missile programs like the Lacrosse and Bullpup missile programs were moved to Orlando. It would be Martin's third manufacturing facility- the first one being the aircraft plant in Baltimore, the second one being the Titan missile facility outside of Denver. On 7 Janaury 1958, General Medaris formally issued the RfP to industry for a new solid-propellant Army ballistic missile to replace the Redstone rocket. An amazing 121 companies submitted proposals and this was quickly winnowed down to seven with two absolute requirements- ballistic missile experience and a manufacturing plant near Cape Canaveral to facilitate testing. The new missile had a nuclear warhead, had to be road mobile and easily air-transported. The missile had to be easy and quick to deploy and fire by combat units in any weather condition. The seven companies were Chrysler (which was responsible for building the Redstone missile), Lockheed (which was already working on the Navy's Polaris missile), Douglas (which was building the Thor IRBM for the USAF), Convair (who was building the Atlas) as well as Goodyear and Sperry-Rand which had extensive missile systems experience even though the two companies hadn't built a missile. The seventh company was Martin. The seven companies were required to give a four hour presentation to General Medaris and his team on their submission in thirty days. The new missile would be named Pershing in honor of General John J. Pershing from the First World War.
The Secretary of the Army, Wilber Brucker, was a former governor of Michigan and was under tremendous political pressure to have Chrysler's submission selected for the Pershing contract. General Medaris wasn't going to have any of this on his watch as Martin was the favored submission based on their technical merit and having a manufacturing facility already in place near the Cape in Orlando. In fact, Martin even offered to demonstrate the mobility of their Pershing design by driving it out from Orland to the Cape for test firing. Brucker did attempt to stall the program to prevent Martin's selection but on 22 March 1958 the Army Ballistic Missile Agency awarded the Pershing contract to Martin. 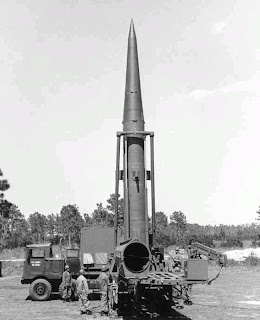 The first version of the missile, the Pershing I, was mounted on tracked vehicles and was first delivered to Fort Sill, Oklahoma in 1962 where the Army formed its first Pershing battalion. The missiles went on nuclear alert in Europe in 1964, with some of the battalions under joint control with the US Army and West Germany (Geilenkirchen AB, the home of the NATO E-3 Sentry AWACS force, was a former German Pershing base). When the Army wanted to improve the mobility of the Pershing battalions with wheeled vehicles and an even faster reaction time should the order to launch come, Martin quickly developed the Pershing Ia system and in an amazing three-month span in 1969, Martin managed an unique swap system to upgrade the units in Europe. New equipment rolled out of the Martin factory in Orlando and was driven to Port Canaveral. One battalion's worth of equipment were loaded onto a Navy ship and transported to Bremerhaven in Germany, where a Pershing I battalion had driven, met the Pershing Ia equipment being unloaded, and drive it back to their bases. Martin would win a follow on contract for an improved version of the Pershing Ia, the Pershing II, in 1975. A deadly accurate missile, the Pershing II had triple the range of the Pershing I/Ia and could even reach Moscow. From 1958, the Pershing program would run for 34 years and generate $4 billion in revenue for Martin. The program consistently ran under budget and ahead of schedule for its entire life. A total of 754 Pershing I and Pershing Ia missiles were built, as well as 276 of the highly accurate Pershing II missiles as well as all the associated support equipment and land vehicles.
The role of the Pershing missile in Cold War deterrence cannot be underestimated. The threat and accuracy of the Pershing missile was once described by a former Soviet defense official as a "scapel held to our throats". It was common knowledge that the Pershing missiles targeted Soviet command and control facilities and in a sense, it didn't threaten Soviet forces, it threatened Soviet leadership. On 8 September 1988, then Vice-President George H.W. Bush spoke at the Longhorn Army Ammunition Plant on the occasion of the disposal of the Pershing missile under the terms of the Intermediate Nuclear Forces Treaty: "The Pershing missile system strengthened deterrence and was concrete evidence of United States resolve. If we had not deployed the Pershing, there would not be an INF Treaty today."
Not a bad payoff for a gamble by George M. Bunker back in 1956. Oh, you might be wondering what the "M" stands for in his name- "Maverick".
Source: Raise Heaven and Earth: The Story of Martin Marietta People and Their Pioneering Achievements