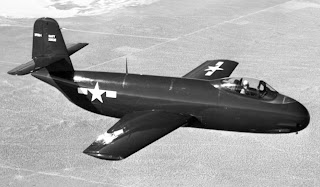 In September 1944, the US Navy gave eight aircraft manufacturers a shot at a contract to build its first carrier-based jet fighter. The Navy relaxed its usual carrier and landing takeoff limitations as much as was practical in order to "obtain the highest possible performance for a carrier-based VF type." Of the eight companies approached, four of them submitted designs- Grumman, McDonnell, North American, and Vought. Douglas was already working on the Navy's D-558 Skystreak research aircraft program and therefore didn't bid. The Navy selected three of the companies to build their designs in order to spread out the risk amongst several approaches. Grumman, to everyone's surprise, didn't make the cut. Grumman's submission was felt to be too close and similar to Vought's submission and thus represented a duplication of effort (this same reasoning led to Boeing's Light Weight Fighter, LWF, submission to be disqualified in the 1970s as it was too similar to the General Dynamics submission which became the F-16). The Navy justified this as Grumman was much busier with the coming F7F Tigercat and F8F Bearcat programs while Vought only had the F4U Corsair program which would be winding down wit the end of the war.
McDonnell's submission became the FD-1/FH-1 Phantom and would be the first carrier-borne jet fighter to go into service with the Navy. North American's submission became the FJ-1 Fury, and Vought's design, the one which we'll focus on in this post, became the F6U Pirate. The Pirate along with the Fury wouldn't have folding wings, instead those jets had an auxillary nose wheel which was inserted into a socket under the nose. The nose wheel was then retracted and the plane "kneeled" forward. This allowed the nose of another aircraft to be parked under the tail of another to compensate for the lack of folding wings.
Built and designed at Vought's main facility in Stratford, Connecticut, it was powered by a single Westinghouse axial-flow J34 engine. Since the J34 was much slimmer than the J33 used on the Fury, the Pirate had a very slender fuselage by comparison to the other single engine design, the Fury. Because the J34 engine was felt to be still-experimental, only taxi runs were performed in Connecticut and the F6U prototype was disassembled and flown to Muroc Army Air Field (later it would be named Edwards AFB) in California for its first flight. It wasn't a good start- 24 minutes into the maiden flight on 2 October 1946, the accessory drive failed and the test pilot, Ted Owens, had to make an emergency landing on the lakebed. The flight test team had to wait 45 days before Westinghouse could provide another engine. Despite other technical issues cropping up in the flight test program, the Navy went ahead and issued an initial production contract for 30 F6U fighters along with contracts for the Phantom and Fury. And this was before the flight test program at Muroc uncovered even more programs with the Pirate- first came the discovery of very unpleasant stall characteristics. Then as the F6U approached Mach 0.6, the rudder began to demonstrate buffet issues. Once this was resolved and the flight envelope was expanded further, the poor longitudinal stability of the Pirate gave it unacceptable Dutch roll oscillations in flight. This resulted in several modifications to the tail unit and aft fuselage. But worst of all, the F6U was woefully underpowered- it had the same equipment (pilot, cockpit, guns, avionics, etc.) as the FH-1 Phantom's immediate successor, the F2H Banshee, but only 1/2 the engines. Whereas the Banshee used two J34 engines, the Pirate had only one. Vought's solution was to incorporate the first jet engine afterburner on a production aircraft, but this added weight and required further rework of the Pirate- something not made any easier with the flight tests taking place in California and the engineering located in Connecticut. To further worsen matters, the afterburner wasn't fully reliable, not always lighting when commanded. 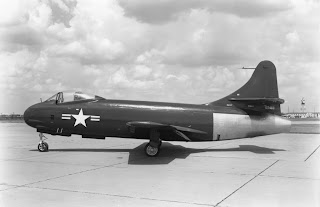 With the Pirate program now approaching two years behind schedule, Vought decided to move the entire program to Grand Prairie, Texas, at NAS Dallas. Many of Vought's engineering and production staff refused to move to Texas and this further exacerbated the delays in the F6U Pirate program. To make matters worse, it was discovered that the main runway at NAS Dallas wasn't long enough for the F6U Pirate and it had to be extended further out into Mountain Creek Lake. While this was being done, the first production F6U Pirates were flight tested at Carswell AFB in Fort Worth starting in June 1949. This didn't sit well with the USAF and the biggest non-military tenant at Carswell, Convair. To avoid further conflicts, the flight testing then got moved again, this time to Ardmore, Oklahoma, at what would later become Ardmore AFB. By the time Vought managed to make the first flight of the first production F6U Pirate, it should have had all 30 of the first production order already delivered to the Navy. By this point, the successor to the FH-1 Phantom was already entering service, the McDonnell F2H Banshee and the first Grumman F9F Panthers were also entering service. By October 1949 only two production Pirates had been accepted by the Navy. By February 1950, Vought managed to deliver all thirty of the contracted F6Us- most of them were stored with VX-3 and then parceled out to various Navy testing facilities. No attempt was made to even carrier-qualify the Pirate- the thirty production aircraft only flew a sum total of 945 hours and most of the aircraft had less than 10 flight hours- enough for a production flight acceptance test flight and a ferry flight to its final disposition.
The go-ahead for production for the Pirate surprised many in the Navy. It was either a case of Navy sympathy for a long valued supplier and as a possible back up for the Grumman F9F Panther program. But whatever the case may be, the Vought F6U Pirate was too little, too late and a shock to many observers given Vought's long history of successful carrier aircraft up to that point. It was a learning experience for Vought that they applied to their next carrier fighter, the F7U Cutlass, which ended up being just as troubled. Caught on the ropes, Vought finally got the carrier-borne jet fighter right with its third try in the form of the F-8 Crusader.
Source: U.S. Naval Air Superiority- Developement of Shipborne Jet Fighters 1943-1962