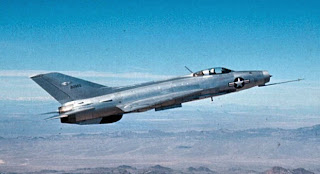 At the height of the Vietnam War, the skies were filled with technologically-advanced American aircraft from both the US Navy and the USAF, yet the air battles were a thread-bare echo of past glories in the 1950s skies over Korea's MiG Alley. By 1967 the Navy had a kill ratio of only 3.7 to 1 (3.7 MiG kills for every Navy fighter lost to a MiG) and the USAF was even worse, with a kill ratio of only 2.2 to 1. By comparison, at the end of the Korean War, the USAF pilots of the North American F-86 Sabre alone had a kill ratio of 10 to 1. While various studies and reports like the Navy's Ault Report offered many suggestions, the basic fact of the matter was that the art of dogfighting as a skill had been lost. In the USAF, for instance, the solution in the 1960s to an increasing accident rate in the McDonnell Douglas F-4 Phantom II was to simply ban air combat maneuvering training (ACM)- the accident rate fell, but legions of Air Force Phantom drivers entered the skies of Vietnam with little experience in knowing that their aircraft could and couldn't do in a dogfight with North Vietnamese MiGs. While a the solutions that eventually restored American supremacy in the skies are complex and beyond the scope of today's blog post, the foundations were being laid down in the black world in the latter half of the 1960s.
The story begins on 16 August 1966 in the Middle East. Operation Rolling Thunder, the sustained air bombardment of North Vietnam, had begun the year prior and would continue until 1968. Monir Radfa, an Iraqi Air Force captain, took off in his Mikoyan MiG-21F from Rashid AB outside of the Iraqi capital for what was supposed to be a local navigation exercise. Instead, he made a dash to the southwest at low level, intending to defect to Israel. The Jordanians failed to intercept him as he streaked low across their country, the RJAF's Hawker Hunters too slow at low level. Once over Israel, he lowered his landing gear and wagged his wings to two intercepting Israeli Mirage III fighters, signaling his intentions and was escorted to Hatzor AB and given asylum. With the MiG-21 being one of the most potent fighters in the Arab air forces that threatened Israel, they immediately set about flight testing the MiG-21 for over 100 hours over the next 12 months, learning its strengths and weaknesses and teaching the Mirage III pilots (the French delta was the main fighter of the IDF in those days) how to defeat the MiG in a dogfight. Initially hesitant to share its prize with the United States, Israel eventually concluded an agreement brokered by the US Defense Intelligence Agency (DIA) to loan the MiG-21 to the US for study in exchange for being allowed to buy the F-4 Phantom II, the American front-line fighter of the day. At the time the Israelis had made several overtures to the Johnson Administration to purchase the Phantom, only to be rebuffed out of a fear by President Johnson of escalating matters in the Middle East. Now that the Israelis had leverage, the Phantoms would be on their way and the US would finally get to study its vaunted adversary in the skies of Vietnam up close.
The MiG was disassembled and transported by a Lockheed C-5 Galaxy to the USAF's secret testing base at Groom Lake, Nevada (Area 51). Responsibility for evaluation of the MiG-21 was given to the USAF's Foreign Technology Division (FTD) that was part of the Air Force Systems Command based at Wright-Patterson AFB in Ohio. AFSC assigned all of its programs with the code word prefix "HAVE". For example, the original stealth demonstrator aircraft that gave rise to the Lockheed F-117 Nighthawk was code named "HAVE BLUE". In the case of the MiG-21 on loan from Israel, it was code named "HAVE DOUGHNUT". Two categories of flight testing were performed on the MiG- the first type concerned technical analysis- performance, flight envelope, engineering, structures, and so on. The second part of the tests were operational- the MiG would be flown in mock dogfights against US fighter aircraft. Because AFSC/FTD's emphasis was technical in nature, most of the HAVE DOUGHNUT flying concerned technical analysis.
The first flight out of Groom Lake took place in January 1968 and continued until April of that year before the MiG was returned to Israel. For three intensive months, the MiG was flown in various profiles to determine how it could be detected by both radar and infrared systems, it flew against the bombers of the Strategic Air Command to see how well the bombers' systems could detect and counter it, and infrared signature tests were carried out using a specially-fitted T-39 Sabreliner that could mount the seeker heads of various missiles in the US inventory. Out of a total of 102 sorties flown as part of HAVE DOUGHNUT, 33 sorties were devoted to operational testing in mock dogfights with the USAF and 25 sorties were devoted to mock dogfights with the Navy. 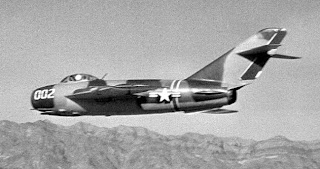 Not four months after the end of HAVE DOUGHNUT, two Syrian MiG-17Fs on a navigation exercise got lost and inadvertently landed at an Israeli air base. Acquisition of the MiG-17s was of high importance to the United States as the MiG-17, though slow and dated, was nimble and the main adversary type encountered in the skies of Vietnam. Though limited to subsonic performance, VNAF MiG-17s were flying circles around American fighter pilots leading to the dismal kill ratios I mentioned above. After testing by the Israelis, the two MiG-17s were then turned over to the United States for analysis. The first MiG-17 made its first US flight at Groom Lake in January 1969 with the code name HAVE DRILL. The second MiG-17 then flew in March of that year with the code name HAVE FERRY. Both programs wound down by June 1969 and the findings were shared with the Navy's new TOPGUN school that was established to reintroduce dogfighting skills to Navy pilots. In addition, the findings of HAVE DOUGHNUT, HAVE DRILL, and HAVE FERRY were shared with the instructors at the USAF's Fighter Weapons School at Nellis AFB, Nevada, where they would go on to establish the Red Flag exercises.
On 25 November 1969 a Cambodian Khmer Air Force pilot defected to South Vietnam in the Chinese copy of the MiG-17F, the Shenyang J-5. The USAF pilot who flew the MiG-17 in HAVE FERRY and HAVE DRILL, Col. Wendell Shawler, was tapped by the AFSC/FTD to go to South Vietnam and make several evaluation flights of the J-5 to establish that it had the same flight characteristics as the MiG-17. This short program of just five flights from Phu Cat AB in South Vietnam was code named HAVE PRIVILEGE.
As a result of these four top secret exploitation programs, both USAF and Navy fighter tactics were changed and pilots were once again trained to exact as much capability and performance out of the aircraft as possible to win the dogfight. It wasn't until 1989 that a Pentagon official confirmed that in the 1981 combat of two US Navy F-14 Tomcats versus two Libyan Sukhoi Su-17 fighters over the Gulf of Sidra that the tactics used had been developed out of mock combat testing with US-operating Soviet fighters. Not long afterwards, HAVE DOUGHNUT, HAVE DRILL, HAVE FERRY, and HAVE PRIVILEGE were declassified. What didn't get mentioned was that a much bigger program succeeded those programs and would remain top secret for 20 years! But more on that program in a future blog post!
Source: Red Eagles: America's Secret MiGs by Steve Davies