The Origins of Red Flag 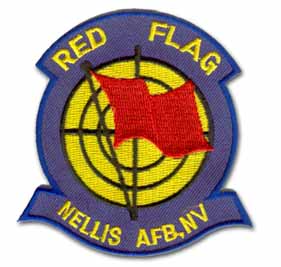 I had started this blog out as a way of sharing a lot of the interesting aviation history I come across in the course of my reading. I'm a bit attention-deficit when it comes to reading, I usually jump between numerous books at once as I've really never been able to read one book straight through then start another. The benefit of this little quirk of mine is that what I post in this blog can be quite varied. Most of the time as I'm reading, I'll put a little dog ear on pages that I think have good material for this blog and over time, you can guess that most of my aviation books have little dog ears in the lower corners. I'll have several possible topics rattling around in my head at any given time and then when I have the chance to sit down and start a post, it's just a matter of seeing which one topic I've been ruminating over comes easiest to type! The topic I had planned for today got postponed as I learned via my regular Twitter stream this morning that on this date thirty-five years ago the first Red Flag exercise was held at Nellis AFB, Nevada. I just happen to be currently reading Steve Davies' wonderfully engaging book Red Eagles: America's Secret MiGs

and it details the origins of the now-famous combat aircraft exercise that is held several times a year at Nellis.
This past weekend I had posted about those first secret MiGs that operated out of Area 51/Groom Lake. The operational exploitation of the MiGs was but one of the first steps taken by the US Air Force and the US Navy to reverse the sagging fortunes of US fighter pilots over the skies of Vietnam. In 1966 the Tactical Fighter Weapons Center (TFWC) was established at Nellis AFB as the leading school house of fighter tactics evaluation and training. One of the keys to the TFWC was making use of the 12,000 square miles of uninhabited desert terrain north of Nellis that gave in the words of Steve Davies "the playground for America's finest fighter pilots". One of the earliest projects based out of the TFWC was the "Red Baron" reports. Since 1966 the Department of Defense's Weapon Systems Evaluation Group had been collecting a wealth of information on every one of the 320 MiG encounters in Vietnam until July 1967 that involved either the McDonnell F-4 Phantom or the Vought F-8 Crusader. That exhaustive data set became Volume I of Red Baron. Volumes II and III analyzed another 259 MiG encounters by Republic F-105 Thunderchiefs as well as other US aircraft. That three-volume set of data became Red Baron I. In 1969, Red Baron II covered 625 MiG encounters from 1967 to the end of Operation Rolling Thunder at the end of 1968. Later, Red Baron III completed the comprehensive analysis of the air war. 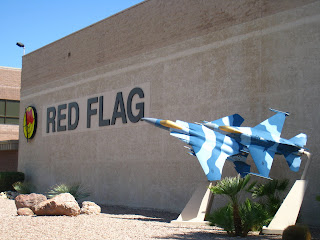 The Red Baron reports were incredibly detailed with interviews of crew members and pilots with questions to be answered such as "Where were you when you first saw the bogeys?" or "What altitudes and speeds were being used in setting up the engagement?". The bottom line of the Red Baron reports was quite simply that American fighter pilots in Vietnam were not familiar enough with fighting dissimilar aircraft- what was needed was DACT- Dissimilar Air Combat Training. Red Baron went even further, recommending that the USAF provide its fighter pilots with realistic enough training based on the detailed study of all of the MiG encounters in the classified reports. One recommendation was the use of actual enemy aircraft (which stemmed from the programs I posted about this weekend) or realistic substitutes. That recommendation led to the formation of the USAF Aggressors, units operating Northrop T-38 Talon trainers and F-5E Tiger II fighters as surrogates for enemy MiGs. The pilots of the Aggressors specialized in emulating Soviet tactics, even using their own organic GCI controllers.
The first Aggressor squadron stood up at Nellis AFB in the summer of 1972, but some of the founders and proponents of the Aggressors wanted to push the training even further. While the first Aggressor squadrons were wildly successful to the point that two overseas Aggressor squadrons were established (one in the Philippines at Clark AB for PACAF and one at RAF Alconbury for USAFE), it was a well-known fact from the Red Baron reports that new fighter pilots in the skies over Vietnam had a disproportionately low life expectancy. Other USAF studies had shown that the majority of combat losses (even outside of Vietnam) occurred within a new pilot's first ten combat missions. Once getting the eleventh combat mission, a new pilot's survival chances quickly improved due to experience. The solution was an elegant one that dovetailed nicely with the mission of Nellis AFB, that of the Aggressors as well as the secret MiG force then based at Area 51/Groom Lake. Recreate the first ten combat missions for pilots in the training environment at Nellis AFB using not only the Aggressors and the MiGs, but also the air-to-ground ranges to improve the accuracy of strike aircraft crews. In May 1975, the Tactical Air Command commander, General Robert J. Dixon, gave his approval for the formation of Red Flag with the first exercises to be held in six months. 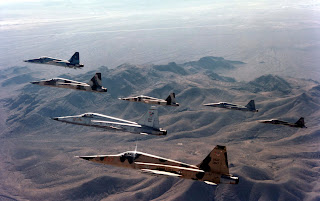 In that hectic six months, the most realistic training environment was created at the weapons ranges north of Nellis AFB. Not only were there to be fighter and strike aircraft, but also electronic warfare aircraft, transports and tankers. Reconnaissance assets would participate. Captured Soviet radar systems and facsimilies were arrayed in the ranges along with an integrated missile and anti-aircraft gun defense system. Targets were laid out and finally, the Aggressors would play the part of enemy MiGs (eventually even the secret MiG force participated). Right on schedule, on 29 November 1975, Red Flag I took place with 37 aircraft, 561 personnel and a total of 552 sorties were flown.
Today's Red Flag is a three week exercise in which entire squadrons deploy with their maintenance and support personnel as if on a wartime deployment. The average Red Flag exercise will have around 100 aircraft with several thousand personnel. Units from all branches of the US military participate as well as Allied nations where an invitation to Red Flag is considered an honor and testament to a foreign unit's professionalism. Since that first Red Flag exercise thirty-five years ago today, it's estimated that over half-a-million personnel have been trained, over 300 types of aircraft have participated and well over thiry nations have participated.
Source: Red Eagles: America's Secret MiGs by Steve Davies