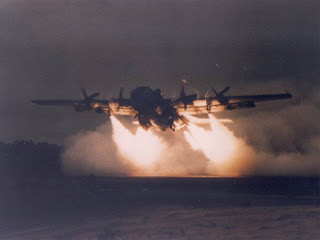 Following the disastrous failure at the Iranian Desert One rendezvous point of the Operation Eagle Claw hostage rescue mission on 24-25 April 1980, a second plan was drawn up immediately after the failed Delta Force mission to use a specially-modified Lockheed C-130 Hercules to land in the Amjadien Stadium across the street from the US Embassy at which point Special Forces teams would retrieve the hostages and then fly out of the soccer field in the center of the stadium. Under the project name Credible Sport, the crash program would produce a highly modified C-130 Hercules that could land and takeoff from a soccer field with 30-foot high obstacles at each end. Authorized by the Secretary of Defense, the top secret Lockheed project modified three C-130Hs- two would be modified to what was called the XFC-130H configuration within 90 days with the third aircraft to be used for testing the retrorocket packages that were to be installed on the Hercules to give it "super STOL" capability.
The aircraft were modified with fully-powered flight controls along with a 35% increase in the control surface areas. The flaps were modified to be double-slotted to increase their lift and the leading edge roots of the horizontal stabilizer were increased along with a corresponding increase in the leading edge dorsal root fin to provide more stability at low speeds. An extended nose section housed the additional avionics for the mission, the nose section coming from a DC-130 drone controller aircraft. The radar from a Vought A-7 Corsair II attack jet was housed in the extreme nose and an under-nose FLIR package would allow night operations. To provide flight path guidance on the approach into the stadium, a laser altimeter and laser range finder were also fitted. As the mission would be flown directly from the United States, the aircraft were modified with the inflight refueling receptacle from a Lockheed C-141 Starlifter. Five inflight refuelings would be needed to reach Tehran. The inflight refueling system reached back to the wings and was plumbed into the wing tanks. Under the fuselage just forward of the aft cargo ramp was an arresting hook- the plan called for the Credible Sport aircraft to recover on an aircraft carrier in case any hostages or personnel needed medical attention. 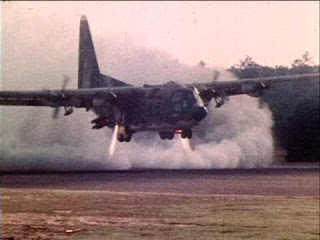 The most extreme modification for the Credible Sport program were the battery of rockets that would give the aircraft its extreme STOL capability. For the landing, eight retrorockets were housed in pairs in sponson fairings on the forward fuselage. Another four rockets on each side of the fuselage were mounted by the main landing gear fairings and were pointed downward. It's believed that the downward rockets were from US Navy ASROC missiles and the retrorockets were from AGM-45 Shrike anti-radar missiles. On approach, speed would be maintained at 85 knots but at 85% engine power to remain at least 5 knots above the stall speed. At height of 50 feet, the downward firing rockets were activated by the navigator for 3 seconds to arrest the descent rate and at touch down, the eight retrorockets deployed out of their fairings and fired with a thrust of 80,000 lbs, bringing the Hercules to a rapid halt.
For takeoff, four main RATO units that came from the Navy's Standard RIM-66 surface-to-air missile were mounted on each side of the aft fuselage. In addition, six smaller rocket units were installed in three pairs- one pair under each wing mounted on the fuel tank pylon and one pair under the tail unit. The tail unit rockets prevented over-rotation and the wing-mounted units were to provide yaw stabilization should the main RATO units not shut down simultaneously. The ten rocket motors for takeoff provided 180,000 lbs of thrust! This was approximately twenty times the power provided by the C-130's four T56 turboprops.
An amazing series of flight tests proved the concept with the first flight taking place on 18 September 1980, but one problem encountered was hot gas ingestion by the T56 turboprops from the retrorocket packages. Despite this, the modified Hercules could takeoff after a ground roll of only 100 feet and was already 300 feet high just 200 feet after lift off. It was an impressive feat considering that the C-130 itself is about 100 feet long. On 29 October 1980, one of the C-130Hs modified, 74-1683, was conducting a landing test when the downward firing rockets failed to ignite and two of the retrorockets fired prematurely followed by the rest of the retrorockets. This slowed the Hercules prematurely and a high descent rate resulted that caused a hard landing that broke off the right wing by tne number three engine. Quick action by the Eglin AFB fire crews prevented loss of life, but the aircraft was a complete loss.
With $30 million spent and only two of the three C-130Hs modified, Credible Sport was canceled when the Iranian revolutionary government indicated a desire for a resolution to the crisis with the change in US administration with the November 4th elections that put Ronald Reagan into office. Of the two modified aircraft, 74-1683 and 74-1686, they received the designation YMC-130H. As 74-1683 was a total loss in the 29 October crash, 74-1686 was partially demodified and donated to the Museum of Aviation at Warner-Robbins, Georgia. The third aircraft, 74-2065, was returned to active service.
This test footage shows how impressive Credible Sport was in action and it also shows in slow motion the crash on 29 October 1980: