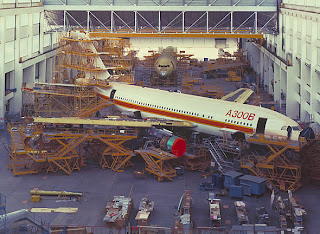 In the late 1960s as the nascent Airbus Industrie was formalizing the design of the A300, the original intent of the consortium was to use a new 47,500 lb-thrust turbofan in development by Rolls-Royce, the RB.207. Great Britain at the time was actively involved in the early days of Airbus as a full partner, riding on the heels of the Anglo-French Concorde program. The two main British companies involved with Airbus at the time were Rolls-Royce to provide the engines for the A300 and Hawker Siddeley to provide the wing design for the airliner. However, all was not well for the commercial airframe start up as development costs in Toulouse were rising and worse yet, RB.207 development was falling behind at Rolls-Royce. I had posted earlier on the A300 that the original design for the aircraft, the HBN100, was a much larger aircraft than what resulted, seating over 300 passengers compared to the 250 of A300 as built. As result of the HBN100 being a twin jet the size of the rival Lockheed L-1011 and McDonnell Douglas DC-10, it would need more powerful engines than the Rolls-Royce RB.211 used on the Tristar and the General Electric CF6 used on the DC-10 and this responsibility was assigned to Rolls-Royce to develop the RB.207.
With the development of the RB.207 behind schedule, timing could not have been worse in 1968 when European financial houses made a run on the French gold reserves that depleted the reserves by 30% in a short period of time and caused not just the collapse of the French franc, but the collapse of President Charles De Gaulle's government amidst political unrest in the country. As economic malaise spread through Europe, airlines began to have doubts about the viability of the A300 and its original 300+ seating capacity. Airbus partners Sud-Aviation and Hawker Siddeley even began to prepare fall back designs based around a smaller aircraft.
Matters worsened through the year for Airbus as the Rolls-Royce was also developing the RB.211 engine for the Tristar as well as the RB.207. Given that three engines were going into the Tristar versus only two engines for the original A300 design, Rolls-Royce began to divert engineering resources from the RB.207 program to the RB.211 program which was facing technical issues of its own as the world's first three-spool engine design. The RB.207 wasn't even Airbus' first choice for the A300. French engine manufacturer SNECMA had partnered with Pratt & Whitney to offer the JT9D engine which was initially favored by Airbus, but Rolls-Royce exercised its considerable political clout and had the UK government push for a "European" engine in the form of the proposed RB.207. Rolls-Royce even went as far as to suggest that it was wrong for an American engine be part of a European aircraft. Due to pressure from Rolls-Royce and the UK government, the RB.207 engine was selected for the original A300 design but in just a few years it was Rolls-Royce itself that was putting more emphasis on the RB.211 for the Tristar than the RB.207 it had pushed for just a few years earlier! 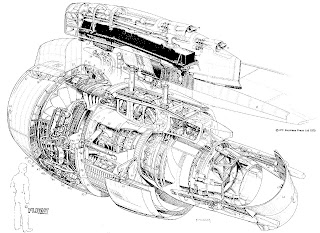 The writing on the wall came when Roger Beteille, the head of Airbus, found out the selling price of the RB.211 engine. He had found out that two RB.207 engines would cost more than three RB.211 engines which put the A300 at a considerable price disadvantage to the Tristar. There was no way the A300 would succeed if Airbus stuck it out with Rolls-Royce and the RB.207 engine. The only way Airbus could find a way out was to change the size of the A300 from a 300+ seat aircraft to a 250 seat maximum aircraft. It was a master stroke that saved the program as it now made existing engines in the form of the RB.211 and the CF6 now appropriate for the A300 and Pratt & Whitney/SNECMA could now offer the JT9D as well.
In December 1968, the A300 was formally launched as a 250 seater with a wider range of engine options that left out the RB.207 engine. As a smaller aircraft, the airlines of Europe were more interested in the design and ironically, it was the head of Hawker Siddeley, Sir Harry Broadhurst, who announced that the RB.207 engine wasn't needed and that the JT9D was on the table as an option for the new A300 design. At this point things got very complicated for the UK government. Money had been provided for the development of the RB.207 engine for the original A300 design. Money had also been invested in the BAC Three-Eleven, which was now square in competition with new, smaller A300 design. The Three-Eleven would have been powered by two RB.211 engines, the engines that Rolls-Royce had given development priority over the RB.207. In the end, a need for address Great Britain's trade deficit meant that official support was given to the Three-Eleven program. This also increased the market for the RB.211 engine as continual problems at Rolls-Royce eventually resulted in the company going into receivership with the British government to keep it afloat. By the summer of 1970 Great Britain withdrew from the Airbus consortium as continued support for Rolls-Royce put it in conflict with the A300, but Sir Harry Broadhurst felt Hawker's investment was worth keeping and Hawker Siddeley remained with the Airbus consortium as a major subcontractor building the wings for the A300.
Source: Flight of the Titans: Boeing, Airbus, and the Battle for the Future of Air Travel