The Birth of the Gulfstream Series of Aircraft 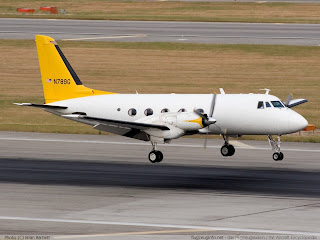 Before the Second World War, Grumman Aircraft had a partnership with New York-based Gillies Aviation to market and sell the company's line of amphibian aircraft. One Gillies' salesmen, a pilot named Henry Schiebel, eventually came to work for Grumman during the war as a company test pilot. In the postwar period as Grumman began to diversify its offerings outside of naval aircraft, Schiebel was the head of the company's transportation department, flying the company's executives on various business trips. At the time, Grumman's civilian offerings were limited to its amphibian line of aircraft from the Widgeon and Goose on the small end of the scale to the Albatross and Mallard on the top end. Because of Schiebel's sales background, he often found himself in the role of pitching one of the amphibians to a civilian customer as the need arose.
Though Schiebel wasn't an engineer, he began working with a small group of engineers that since the mid-1950s in their free time after hours had been putting some effort into coming up with a civilian feederliner that could also be used for corporate and private use. Unlike Grumman's previous offerings, what the engineers had in mind was a land-based aircraft that would offer a level of comfort and performance that justified their forecast one-million dollar price given that most companies in those days could get a good used DC-3 for just over $200,000. Schiebel's job was to bring to the after-hours effort not just a pilot's perspective, but also the perspective of someone who was intimately aware of the needs of civilian owners and operators.
Their starting point was actually basing their aircraft's cabin cross-section on that of the DC-3. Grumman had several of them in its corporate flight department and everyone agreed that they were the most comfortable aircraft when it came to business travel compared to other types of aircraft available on the market. Their second consideration was the type of powerplant to use- again, all were in agreement that a turboprop would offered good operating economics as well as fuel efficiency that translated into a good operating range. At the time, the Rolls-Royce Dart engine had the most flying time of any turboprop and was well-known in the commercial world as it already powered several successful airliners like the Vickers Viscount. The team was well aware that their biggest competition would be pure jets and the prototype Lockheed Jetstar was already flying. This was long before turbofans entered the picture and the choice of a turboprop, while slower in speed than a pure jet, offered better range. 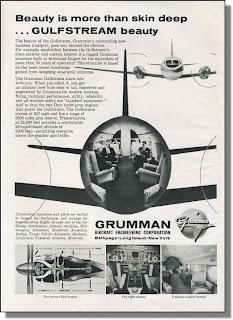 By the point that the project had matured to the point that it was time to pitch it to Leroy Grumman, a minor bit of discord developed within the team about whether this new aircraft should have a low-wing or a high-wing. Aerodynamically there were no disadvantages or advantages to either layout. Schiebel, drawing upon his experiences in aircraft sales, pushed for a low-wing layout. Rather amusingly, the debate would be settled by Leroy Grumman himself when he was presented with the project by Schiebel and the adhoc group of engineers. Two models of the design were made- one with a low-mounted wing and one with a high-mounted wing. Both were shown to Grumman and he immediately settled on the low-winged configuration. He then summoned the heads of finance and his lieutenants to view the engineers presentation. Building the aircraft would require an initial investment of $23 million and Grumman himself is reportedly to have said "I'd like to build this airplane before I retire." Some had asked whether a market survey should be done first before committing to the project, but Grumman felt comfortable with the fact that Henry Schiebel had been involved with the project all along and trusted his thoughts on the market for the aircraft. Interestingly a competitor did do a market survey and predicted that Grumman would sell less than 20 of the aircraft.
It turned out that after the maiden flight of the Grumman Gulfstream I on 14 August 1958, the company would go on and build approximately 200 Gulfstream Is and launched in iconic line of business aircraft that have become near-synonymous with business aircraft. The Gulfstream I had two features which have been kept in every successive Gulfstream right up to the current Gulfstream 650 that's in flight testing- the characteristic nose/cockpit shape and the large oval windows, the largest of any business aircraft.
The first Gulfstream Is sold for $845,000 and the first one went to the Sinclair Refining Company and the FAA, responsible for certifying the aircraft, even got two for its own use. By 1963, Grumman was building two Gulfstream Is a month and began work on transitioning the product line to jet power with the Rolls-Royce Spey-powered Gulfstream II which first flew in October 1966. The new Gulfstream jets were built a new plant set up in Savannah, Georgia, by Grumman and though Grumman is no longer involved with the production of Gulfstream jets, the plant in Savannah is still to this day where they are built.
Source: The Grumman Story