PSA's Reasons for Betting on the Tristar 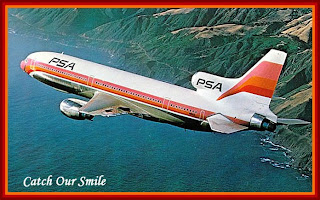 On May 6, 1949, twenty-six sailors on shore leave from the naval base at San Diego paid a $15.60 one way fare on a small airline called PSA (Pacific Southwest Airlines) which had a single red and white DC-3 to fly to Oakland, California. Over the course of the next 20 years, PSA would grow to dominate the West Coast market between the second busiest domestic air market in the world, that between Southern California and the Bay Area (the biggest domestic market in the world is the Boston-New York-Washington corridor on the East Coast). After what can only be described as the Cinderella story of the airline industry, 1969 presented PSA with a new set of challenges that would ultimately shake the foundation of the airline to its deepest roots and set the stage for its eventual acquisition in 1987 by USAir.

The first thing to keep in mind when looking at the historical context of PSA in 1969 is that unlike most other airlines, PSA only flew to cities in California and as an intrastate carrier, wasn't subject to the regulatory and market control oversight of the federal Civil Aeronautics Board (CAB). It was the CAB that got abolished with deregulation in the early 1980s. Instead, as an intrastate carrier, PSA had only to answer to the California Public Utilities Commission (PUC) to get approval for fare increases and new services. And for the 20 years that PSA had been flying up to 1969, the PUC always gave PSA what it wanted much to chagrin of the established majors that competed with PSA (primarily United and Western). PSA was getting competition from two fronts- first from the established carriers of Western and United which had traditionally been dominant on the West Coast. After 20 years of getting their lunch eaten by PSA, they were fighting back with increased frequencies on the California Corridor. The second front was from a small intrastate start up based in Orange County called Air California. Though smaller, they proved to be just as an aggressive competitor to PSA as the majors.

At the turn of the decade, two PUC actions signaled the end of PSA's favored status with the PUC. The first came when PSA applied to open up service from Long Beach to San Francisco, Oakland, San Jose, Sacramento, and San Diego. This came about as a result of consumer demand that was getting increasingly irritated about the airport congestion at LAX. The PUC approved temporary service between Long Beach and San Francisco, but dragged its feet on the other cities and when it did finally approve, it was well after the Christmas holiday travel rush.

Not long after, PSA made a move to eliminate Air California from the market by buying the smaller airline outright. PSA stood poised to take a 79% ownership stake in Air California subject to PUC approval, but again, as was previously the case, foot-dragging by the PUC led to PSA cancelling the proposed buyout.

Now I had mentioned on the airport congestion issue at LAX above. Gate space was the biggest problem for PSA and back then, the majors weren't about the relinquish any gates to the very airline that was effectively driving them from the California market. Gate space also became an issue at San Francisco as well. In June of 1969 PSA inaugurated "every hour on the hour" service between LAX and San Francisco and "every hour on the half-hour" service between San Diego and LAX. Outside of Eastern's shuttle operation on the East Coast and the Ponte Aerea in Brazil, this was the first time a scheduled airline offered service that didn't require a timetable. It was a hit with passengers and load factors soared on the flights out of LAX to San Francisco and San Diego. With certain times being more popular than others, PSA wanted to put 2 Boeing 727-200s on certain time slots, but lacked the gate space at both LAX and San Francisco.

PSA president Andy Andrews met with the executives at Lockheed several times during 1969-1970 to discuss the possibilities of adding the new Tristar 300-seat widebody to the PSA fleet to solve the gate space problem at LAX and San Francisco as well as place a much larger and comfortable aircraft in service that would trump the Electras and DC-9s of Air California and the 737s and 727s of United and Western. In addition, the performance of the Tristar was such that the PSA board investigated service beyond California (Hawaii being one distinct possibility).

On August 31, 1970, Andy Andrews announced to the local press and to the PSA employees at the San Diego headquarters that PSA had signed orders for two Lockheed L-1011 Tristars with a letter of intent for three more delivery positions. The contract was worth $100 million with a delivery date of 1972. And impressively enough, the Tristar could operate from every airport in the PSA network, even Burbank! The venture, however, would be short lived and is subject for a future posting!
Source: Poor Sailors' Airline: The Story of Kenny Friedkin's Pacific Southwest Airlines by Gary Kissel. Palawdr Press, 2002.
at 22:18