How the Boeing 757 Almost Became a Joint US-UK Program 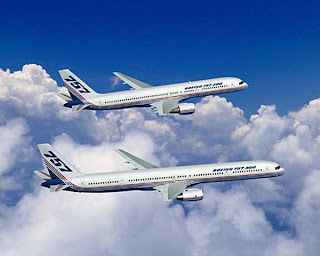 Following the withdrawal of the United Kingdom from the Airbus consortium and the A300 program, the 1970s were times of significant uncertainty for the British airframe manufacturers. Some in the British aircraft industry advocated for return to the Airbus consortium, some pushed for an indigenous airframe and yet others suggested joint ventures with other nations, even if that meant working with Europe or even the Americans. The indigenous solution was the least likely of the day in light of the UK government's unwillingness to invest in the promising BAC Three-Eleven program. In 1974 the French laid down the conditions for the return of the UK to Airbus- not only would the UK have to make a substantial contribution to the development and production costs of the A300, but British airlines would also have to purchase the A300 jetliner. It was the low point of relations between the French and British that once rode the wave of cooperation with the Concorde program. Accusations were even aired in the press of the day with each nation belittling the other's aerospace industry.
Politics complicated the equation with the recession following the 1973 Yom Kippur War and the Arab oil embargo on the West. The West German government called for increase in financial commitment to Airbus as financial austerity in that nation called for a need to decrease the West German government's financial stake to 25% of what it was at the time. The suggested solution was to expand the Airbus consortium to include the UK and Italy to offset domestic decreases in the financial investment in Airbus by the Bonn government. In the UK, the bankruptcy of Rolls-Royce and the difficulties of the Lockheed Tristar program put the preservation of British aviation jobs as a top political priority. In 1976 further consolidation of the British aviation industry took place with the formation of British Aerospace with the merger of BAC and Hawker Siddeley. The new company's priority under the leadership of Lord Beswick was a new commercial airframe.
At the time the French were holding discussions with McDonnell Douglas on a successor to the Dassault Mercure, the CFM56-powered Mercure 200. However, the leadership of McDonnell Douglas wasn't convinced the Mercure 200 was the aircraft to launch a trans-Atlantic venture. As a result of wanting to see what other European manufacturers had on the table, discussions were also held with British Aerospace. At the time there were several promising designs from Dassault, Aerospatiale, and BAC (which again was looking a new version of the One-Eleven provisionally designated the X-Eleven). Britain at the time was keen on the JET program (Joint European Transport) 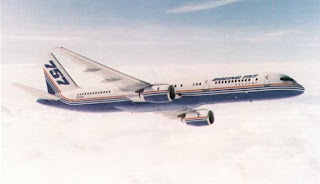 In August 1976 a team of BAC/Hawker engineers (now in the employment of the new British Aerospace entity) visited Boeing in Seattle to review the progress on what would be come the Boeing 757. At the time work was taking place on what was provisionally designated the Trident Five which by coincidence shared a lot of features with the Boeing 757. Like the early 757 design that had a T-tail and 727 nose, the Trident Five had a Trident nose and T-tail combined with a stretched fuselage with a moderately swept wing mounting two RB.211 engines in underwing nacelles. Boeing's president at the time, the colorful Tex Boullioun, offered BAe design work on the wing, engines, RB.211 nacelles and landing gear on the 757. In fact, Boeing was willing to even have final assembly of the Boeing 757 in the UK with flight testing taking place there. "I can't understand why any would want final assembly- it's 7% of time spent on the aircraft with 97% of the problems" as Boullion put it to BAe's head, Lord Beswick.

The British investment to the Boeing 757 was less than what the French wanted for re-entry into Airbus and the potential value to British industry was well in excess of US$3 billion. Boeing went as far as to extend an invitation to British subcontractors to visit Seattle and discuss specific areas of involvement. British Airways was already discussing an order for the 757 and it wasn't a state secret that Lord Beswick disliked the French. But once again, politics sidelines the deal. Despite the new RB.211 engine variant for the 757 being key to Rolls-Royce's recovery, the political winds of the day called for cooperation with the Europeans and with Hawker Siddeley designing an all new supercritical wing for the upcoming A310, it was felt at the highest levels of the government to continue along with what Hawker Siddeley had started with Airbus. The UK had joined the European Economic Community in 1973 and a BAe deal with Boeing to design and build the 757 was unacceptable in light of the spirit of the EEC which pushed pan-European business and industrial cooperation.
Source: Flight of the Titans: Boeing, Airbus, and the Battle for the Future of Air Travel