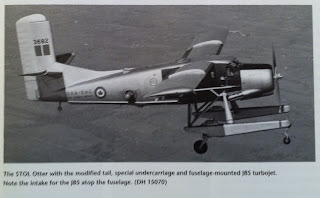 Throughout the 1950s De Havilland Canada saw its reputation for tough STOL aircraft grow with the DHC-2 Beaver and its larger successor, the DHC-3 Otter. From the research standpoint, the durability and load carrying capacity of the Otter in particular led to one of the more unusual STOL aircraft research programs that while little-known to most, played a significant role in advancing De Havilland Canada's knowledge base in STOL aerodynamics. In 1956, two agencies in the Canadian government, the National Research Council and the Defence Research Board, agreed to a joint venture with the company to use a highly modified Otter for STOL research. Both the NRC and DRB had been closely involved with De Havilland with the Beaver and Otter development for several years already. The government report on the proposed program stated "The purpose of the DRB/DHC program is to assess the aerodynamic performance, stability and control problems of STOL aircraft wit the object of finding new refinements in the art." 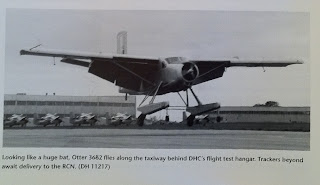 The Otter STOL research program progressed in three phases. The first phase had an ex-RCAF Otter modified with a large "bat wing" flap on the inboard half of each wing. This greatly increased the wing chord and wing surface area. Both the modified Otter and a standard Otter were tested to evaluate the differences each successive modification would bring to STOL flight. In addition, the horizontal tailplane was given a considerable amount of dihedral and moved up the fin to bring it out of the propwash of the main engine. Since most flights would take place in the slow flight regime, the fin was significantly enlarged in height and chord to provide more directional authority at low speeds. Before the first flights took place, the modified Otter was fixed to ground rig that was truck-towed up and down the main runway at De Havilland Canada's Downsview facility up to 35mph to evaluated wing behavior just before liftoff/after touchdown. Once the modifications were cleared, a series of short hops commenced that led to longer flights. This first series of fight tests ended in 1960.
For the second phase of testing, the Otter was again modified. The original landing gear was replaced with a very robust external four-point gear to absorb the impact of high-sink rate landings. The gear looked a lot like two small floats, in fact, but was designed to absorb as much as twice the energy of an STOL landing over a standard Otter. The second modification put a General Electric J85 turbojet (similar to what is used on the Cessna T-37 and Northorp F-5 series of fighters) in the rear fuselage that had its exhaust diverted out vectorable diverter exhausts on each side of the lower rear fuselage. A rotary control in the cockpit allowed the DHC test pilots to divert the J85's thrust fully aft to as much as full forward to evaluate the effects of jet deflection along with the slipstream over the bat wing flap sections by the main engine. In this configuration, the modified Otter could fly as slowly as 45 mph! This series of tests ran from 1961 to 1962. 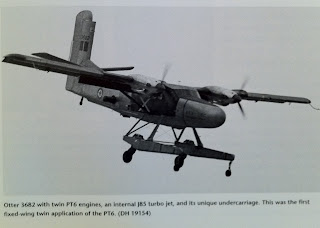 The last and third phase of testing benefitted from De Havilland Canada's close association with Pratt & Whitney Canada in the development of the PT6 turboprop. As DHC had modified a Beech 18 for powerplant company to flight test the PT6 prototype engines, DHC had an inside track on the PT6 and its development. The original main radial engine of the Otter was removed and replaced with a rounded nose fairing and two PT6 turboprop engines were rented from Pratt & Whitney Canada and installed on the wings just outboard of the bat wing sections. Several hundred hours' flying time were logged studying the effects of the more powerful propwash of the twin PT6 engines with the J85 jet engine and its vectorable exhaust. When this phase of the Otter STOL program ended in 1965, the experience and data gathered would have a significant impact on the De Havilland DHC-6 Twin Otter program that was launched in that same year.
Source: De Havilland in Canada by Fred W. Hotson. CANAV Books, 1999, p178-179.
at 21:03