The Skunk Works Make a Real Stinker: The Lockheed XF-90

In mid-1945 Lockheed responded to an Army request for proposals for an advanced jet fighter design. One of the stipulations of the Army RfP that was issued to the American aircraft industry was the use of off-the-shelf engine designs and despite this requirement, Lockheed submitted a design based loosely on the P-80 (later redesignated F-80) Shooting Star using their own advanced L-1000 axial flow turbojet which at the time only existed on paper. Though what at the L-1000 engine offered was a quantum leap over existing engine designs, the Army disqualified Lockheed's early submission. An alternate proposal with the General Electric J35 was offered, but it failed to offer any advance over the North American F-86 Sabre then in development. Kelly Johnson, head of the Lockheed "Skunk Works" that had successfully (and quickly) built the XP-80 prototype, decided that the design would be refined further and use two Westinghouse J34 engines. But quite presciently, Johnson realized that any engine would require an afterburner to achieve the desired performance levels. At the time one had not yet flown and Lockheed did much early work using the second XP-80 prototype to test various afterburner designs.
By the fall of 1945 the Army's requirements specified what was called a "penetration fighter" that would have performance and a long range to escort heavy bombers deep into enemy territory. Lockheed submitted its refined design which would be come the XF-90, McDonnell submitted what would become the XF-88, and Convair had submitted a design that was later overturned due to political considerations after having been selected and instead Lockheed, McDonnell, and North American were asked to build prototypes, the North American design being what would become the XF-93 (based on the F-86 Sabre).
The original design was to have featured delta wings, but Lockheed's own wind tunnel testing didn't show the expected gains and what had been started on the delta wings had to be scrapped as the aircraft was redesigned with 35-degree swept wings, a sharp pointed nose and a swept-back empennage. In the summer of 1948 Lockheed's design was redesignated from XP-90 to XF-90. Unlike the success that came with the building of the XP-80 prototypes, the XF-90 wasn't able to fully benefit from the lean techniques used in the Skunk Works and as a result, compromises had to be made that resulted in the XF-90 being overbuilt and heavier than its original specification.
In fact, the XF-90 prototype was so heavy, the original Westinghouse J34 engines that were used that lacked the afterburner weren't enough to get the aircraft off the ground! RATO units had to be used for nearly all of the first seventeen flights unless the prototype was lightly loaded with little fuel. For most of 1949 Lockheed struggled with not just a woefully-underpowered fighter, but also one with a number of handling issues. By September of that year, Westinghouse finally delivered J34 engines with afterburners which helped somewhat to alleviate the anemic performance of the XF-90. The second XF-90 was the first to fly with the afterburning J34 engines and its performance was still an issue. With the use of afterburner, fuel consumption rose and large wingtip fuel tanks were added to the design that doubled the XF-90's range. Unfortunately, that also meant an increase in weight that exacerbated the aircraft's performance issues. 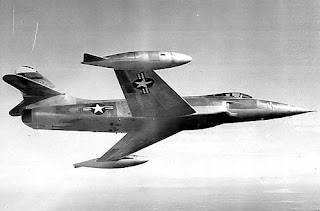 In the summer of 1950 the XF-90 was formally entered into the Penetration Fighter Evaluation Program and pitted against the McDonnell XF-88 and the North American XF-93. After the USAF evaluation of the candidate aircraft, the McDonnell XF-88 was declared the winner, but with the Korean War on the horizon, the USAF wanted the penetration fighters to be considered for the fighter bomber role. Despite McDonnell winning the competition, the Air Force felt that the modifications to the XF-88 would have cost too much and the overbuilt XF-90 was suggested as having the necessary structural strength for low-altitude air-to-ground missions. Despite a flurry of proposals to put the XF-90 into production as the F-90A, nothing ever resulted as the Air Force decided that buying more Republic F-84G Thunderjets filled the need more economically and at lower risk. In the Korean War, the F-84G proved itself ably in the ground attack role.
With the end of the penetration fighter program, the XF-90 was formally canceled after an expenditure of just over five million dollars. The first XF-90 went to the Lewis Flight Propulsion Laboratory in Ohio where its eventual fate has been lost to history. The second XF-90 was used as a ground specimen in a series of nuclear tests in Nevada in 1952. In 2003, the National Museum of the United States Air Force recovered the hulk from Nevada test site and decontaminated it for display at the museum on the effects of nuclear testing.
Amidst the many successes of the Lockheed Skunk Works and its iconic head, Kelly Johnson, the sleek looking XF-90 only looked fast and remains one of the company's more dismal missteps in aviation history. The winner of the penetration fighter contest, the McDonnell XF-88, would eventually be refined at McDonnell's own cost and would later win a production contract as the larger and more powerful F-101 Voodoo.
Source: Experimental & Prototype U.S. Air Force Jet Fighters