The Disastrous Flop That Was the Brewster F2A Buffalo 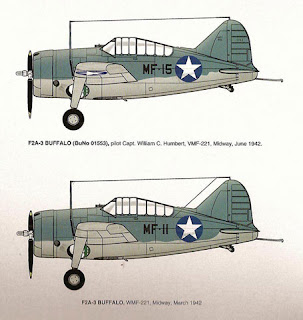 If you'd been following my Twitter stream earlier today (@SentinelChicken), I had been posting tidbits about the failure that was the Brewster F2A Buffalo, quite possibly one of the worst fighting aircraft we sent into action during the Second World War. The saga of Brewster Buffalo not to mention the tales of mismanagement at the Brewster Aeronautical Corporation from the 1930s right into World War II would give me blog material for at least seven posts, but this evening I want to try and keep things strictly on the American combat history of the F2A Buffalo. In fact, there was only one major battle that the United States committed the Buffalo, and that was in the hand of Marine aviators at the Battle of Midway in June 1942.
When the US Navy placed an order for 54 F2A-1 Buffalos on 11 June 1938, it was the Navy's first large scale production contract for monoplane fighter aircraft. The choice of Brewster was an unusual one given that they had only established an aeronautical division in 1935 and the 1936 order of the prototype XF2A-1 was already controversial within the Navy. As insurance, the Navy also issued a contract with Grumman Aircraft for the prototype XF4F Wildcat- and a damn thing they did, too, as history has shown. From the time of the order of the XF2A-1 to the first flight in June 1938, two years had elapsed which by the state of aviation technology in the late 1930s was an extraordinarily long period of time. Technical issues beset the Buffalo flight test program and a series of design refinements were needed to get the F2A to an operational standard that satisfied the Navy. Weight was always an issue with the stubby aircraft- the first production version, the F2A-1, for example, took 30 minutes to reach 21,000 feet! By the time 108 F2A-3 were built, an additional 1,500 lbs were added to the aircraft's weight and the Navy, finally dissatisfied with the evolution of the Buffalo, passed its F2A-3s to the US Marine Corps.
Following the attack on Pearl Harbor on 7 December 1941, the aircraft carrier USS Saratoga was tasked to deliver the fourteen F2As of Marine squadron VMF-221 to Wake Island. But as Wake had fallen to the Japanese on 23 December, on Christmas Day VMF-221 was diverted instead to Midway Island, becoming the first fighter defenses for the island bastion. Other than the occasional combat air patrol to intercept Japanese flying boats, it wasn't until April that the fortification efforts at Midway took importance once the breaking of Japanese codes indicated that the Japanese planned to take Midway in June 1942. By the end of May, 21 Marine Corps F2As made up the majority of the island's land-based fighter defenses along with 7 F4F Wildcats. On 3 June 1942 the Japanese task force had been spotted and the Marine fighters prepared for action. Seven F2As and five F4Fs were dispatched to attack an incoming formation of Japanese aircraft while twelve remained in orbit over Midway along with a single F4F to defend against a second attack that might come from another direction. 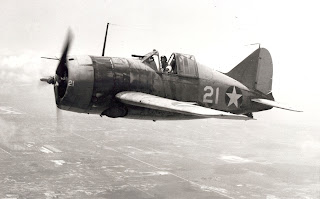 A one-hundred eight aircraft strike force from the carrier Hiryu were intercepted by the first group and was soon joined by the second group that had been orbiting over Midway. Of the twenty-five Marine Corps pilots that set out on that day to defend Midway, fifteen were killed in action including their commanding officer, Major Floyd Parks. Thirteen F2A Buffalos were shot down by the superior Mitsubishi A6M Zero fighters along with two F4F Wildcats. Of the remaining F2As, only two were in any condition to fly again. One surviving pilot commented "Any commander who orders pilots out for combat in an F2A should consider the pilot lost before leaving the ground." That single air battle destroyed VMF-221 as a fighting unit. Its surviving personnel dispersed to help the other units defending Midway. In fact, that air battle on that morning of 3 June 1942 was the heaviest loss of Marine Corps pilots ever sustained during the Second World War! In fact, most of those pilots lost their lives in the first few minutes of the air battle.
After the Battle of Midway, the F2A Buffalos were immediately withdrawn from front line service in US Marine Corps. All were assigned to stateside training units and even then, the Buffalo was disliked by pilots. They only lasted a few months in the role and most were scrapped with a handful going to aviation mechanic schools to be taken apart for instruction purposes. As a result, not a single American F2A Buffalo survived and none are in existence today other than examples that served with foreign nations overseas. It was the beginning of the end for Brewster as a defense contractor- in fact, just prior to the Battle of Midway, the US Navy seized control of Brewster's production plants and ousted its management. By 1946, Brewster was finally liquidated for good.
Source: United States Naval Fighters of World War II in Action