Sunset of the Seaplane- The Convair P6Y 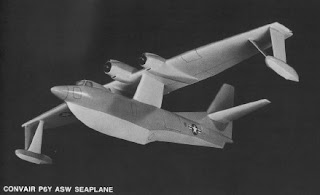 With the rapid expansion of the Soviet submarine fleet in the 1950s, the US Navy embarked on a series of programs to improve its anti-submarine warfare capabilities. Some of these efforts paid off handsomely with the development of new detection equipment and the rise of the nuclear-powered hunter-killer submarine (SSN). At the time, though, what the Navy really wanted was a means to quickly detect and prosecute enemy submarines as far away as possible from the carrier task forces. This meant the use of aircraft to cover the distances involved and to search the large areas of open ocean. At the time the furthest advances were being made in sonar technology and the Navy began work on the concept of using a dunking sonar on a seaplane. The seaplane could seed an area of interest with sonobuoys and then land on the water and use a dunking sonar to further track an enemy submarine. Dunking sonars had already come into use in helicopters but these were strictly short range options as helicopters didn't have the speed and range of a conventional aircraft.
In 1954 the US Navy's Bureau of Aeronautics (BuAer) met with Convair which had long established its credentials in the seaplane field from before World War 2 onward with legendary aircraft like the PBY Catalina and an aggressive postwar program of hydrodynamics research for flying boat aircraft. Convair developed what was called the "Dunker" which was to be powered by two Wright R-3350 Double Cyclone radial engines and capable of operating from rough ocean seas. Tested in model form, the Dunker's most distinctive feature was a very deeply sculpted hull form designed to "cut" through the waves. The wing was high-mounted above the fuselage on a pylon like that of the PBY Catalina to provide the necessary clearance for the engines when operating in rough seas. By 1956 the Dunker's design refined further to a three-engined aircraft using three Pratt & Whitney R-2800 radial engines which allowed for a larger and more capable design.
As a result of Convair's ongoing work, BuAer issued a Request for Proposals (RfP) in May 1956 for an advanced ASW seaplane of flying boat configuration capable of operating from rough ocean seas to use dunking sonar. Martin submitted a four-engined design that was designated the P7M Submaster and was based in large part on Martin's existing work on the jet-powered P6M Seamaster. Convair's submission was a further refinement of the Dunker design and was designated P6Y. Convair's design was much more advanced that Martin's submission. The P6Y retained the three R-2800 radial piston engines, but in order to allow slow flight and softer landings in rough seas, an innovative full-span boundary layer lift control (BLC) system would be installed. Two General Electric J85 turbojet engines were installed side-by-side in the central engine nacelle behind the R-2800 engine. The inboard flaps of the 127-foot wing used both suction above and just ahead of the flaps and jet exhaust from the J85s blowing head of the flaps to dramatically increase the effectiveness of the flaps. The wings outboard of the left and right engine nacelles used BLC to blow a sheet of high-velocity air across the top of the flaps. Wingtip mounted swivelling jet nozzles were used to augment the control authority of the ailerons in low speed regimes. Convair estimated that the BLC system on the P6Y would allow landings as slow as 40 kts, impressive for an aircraft with a crew of 10 and a gross weight of over 100,000 lbs. The design of the P6Y was led by German engineer Hans Amtmann, who during the Second World War had designed a flying boats for Blohm und Voss. Reportedly Amtmann even spent time on US subs to see first hand the challenges of hunting submarines in the open ocean! 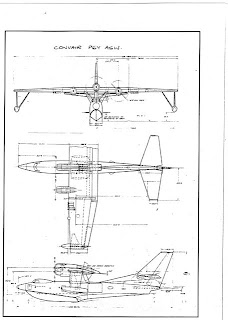 The dunking sonar and sonobuoys were housed in the center of the fuselage with a weapons bay aft of the sonar compartment that could carry depth charges, torpedoes or even nuclear weapons. A rotating bomb bay door was used to create a smooth and watertight seal on the bottom of the hull. The P6Y would have been able to operate in rough seas up to 12 feet with its deeply cut hull and BLC flap system.
By 1957 despite advanced design work, the maritime patrol community in the US Navy was less-than-enthused about open ocean rough water operation. Experience in the Second World War showed this to be highly uncomfortably and extremely rough on the structures and systems of even the most robust flying boats. With a general lack of support from the US Navy's operational patrol squadrons, the Convair P6Y was canceled in December 1957. From that point on, the role of maritime patrol and ASW would pass on to landplanes. That same year the Navy issued an RfP for successor to both the Lockheed P2V Neptune and the Martin P5M Marlin and specified a land-based aircraft to satisfy the demands of the patrol community. This aircraft would be a derivative of the Lockheed Electra and first flew in 1958 as the YP3V. In production the P3V was named Orion and after 1962 it was redesignated P-3.
Though the cancellation of the Convair P6Y marked a turning point in naval aviation as landplanes took over roles traditionally assigned to seaplanes, the concept behind the P6Y didn't die there. In 1966 the Japanese Defense Agency issued a contract to flying boat builder Shin Meiwa for an ocean-going ASW flying boat which became the Shin Meiwa PS-1. The PS-1 was powered by four General Electric T64 turboprop engines, but like the P6Y, it had an extra engine in the form of a T58 turboshaft mounted in the dorsal center fuselage to drive a powerful BLC system that allowed the PS-1 to land as slowly as 50-55 kts. Robustly built with a deep hull form influenced by the P6Y, the PS-1 could operate in seas as rough as 14 feet. Like the P6Y, the PS-1 would alight on the ocean and use a dunking sonar to prosecute submarine contacts. 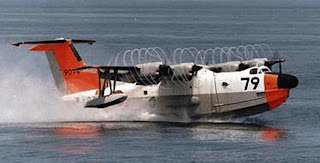 The last PS-1 was delivered to the Japanese Martime Self-Defense Force in 1978. Further procurement after only 21 airframes ended after the open ocean ASW mission went to the Lockheed P-3C Orion which cost much less to procure and operated than the PS-1. However, 12 examples of a search and rescue version of the PS-1 were built starting in 1975 and remain in service to this day as the US-1. In 2003 Shin Meiwa first flew an upgraded version of the US-1 flying boat designated the US-1 Kai ("Kai" meaning upgraded) that kept the deep hull form and BLC system but mated the design with advanced Rolls-Royce AE2100 turboprop engines and a Lycoming CTS800 turboshaft driving the BLC system.
Source: Convair Advanced Designs: Secret Projects From San Diego, 1923-1962