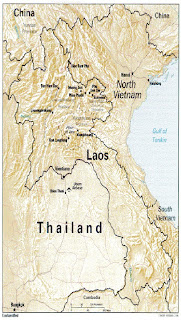 Following the partition of Vietnam in 1954, North Vietnam increased its support of not just the Viet Cong insurgency in the south but also provided support to the Pathet Lao insurgency in Laos. With the increase in activity of the Pathet Lao in the latter half of the 1950s, the Laotian government in Vientiane needed more information on the disposition and activities of the insurgents but the air arm of the nation lacked any sort of reconnaissance capability. As a result, the Vientiane government turned to the United States for assistance. At the time, the international commission (the ICC) that was overseeing the partition and planned reunification of Vietnam had strict rules about the activity of combat aircraft over Laos. So the first efforts consisted of a camera-equipped Douglas C-47 that was "assigned" to the US air attache in Saigon and Vientiane. As the C-47 flew between the two cities it was "assigned" to, it would fly over suspect Pathet Lao enclaves. This continued until February 1961 when the aircraft got shot down in the highlands in the northern part of Laos.
As a result, President John F. Kennedy asked for more effective measures to be put in place to keep an eye on Pathet Lao activities. In April of that year, the Pacific Air Forces (PACAF) asked for volunteers from the two McDonnell F-101 Voodoo squadrons in the area, the 15th TRS at Kadena AB and the 45th TRS at Misawa AB. The recon pilots had to have recent Lockheed T-33 experience. Two pilots, Captain Bob Caudry and Lieutenant Fred Muesegaes, volunteered and were flown to Clark AB, Philippines, the headquarters of PACAF, to begin briefings of their top secret mission code named "Operation Field Goal".
Operation Field Goal was made up initially of the two Voodoo pilots, five enlisted men, a crew chielf, and an additional officer to command the operation. A single Lockheed RT-33 was assigned to the project. The RT-33 was a hybrid of the T-33 trainer with the camera nose of the RF-80 Shooting Star. With an uprated jet engine and an additional fuel tank in place of the rear seat, Operation Field Goal was then moved from Clark AB to RTAFB (Royal Thai Air Force Base) Udorn in the northern part of Thailand, a short hop from the Laotian capital of Vientiane. Udorn would later in the Vietnam War become and important USAF base that would become home to several F-4 Phantom squadrons, but in 1961, Udorn hadn't changed much from its days as a Japanese Army Air Force base in World War 2. The only navaid at Udorn was a low-powered radio beacon with a range of about 25 miles, and on arrival, the RT-33 had to buzz the main runway to drive water buffalo away.
A Marine detachment provided fuel and also built a tent city at Udorn (the first US presence at this base aside from the irregular operations of CIA-run Air America). Both Caudry and Muesegaes developed their own procedures for operating the RT-33 from the primitive base, right down to their own approach procedures for use in bad weather. A US Military Advisory Group in Vientiane tasked the RT-33 missions and at the end of each flight, the film was flown by an Air America helicopter to Vientiane for development and analysis. The pilot on that mission often accompanied to film to assist the photo-interpreters.

Captain Bob Caudry flew the first Operation Field Goal mission on 24 April 1961, first overflying the Plain of Jars at 20,000 feet before making a low level run at 200 feet of a major road in an insurgent-held area of Laos. A total of sixteen missions with good intelligence were flown until 10 May 1961 when the ICC demanded the flights over Laos stop. Given the primitive nature of the RTAFB Udorn at the time and the grueling nature of the recon missions, Operation Field Goal moved to Don Muang Airport in Bangkok with plans of resuming the missions from there once the ICC lifted its ban. The ban did get lifted finally on 9 October 1961 and the Field Goal missions resumed, this time flying from Bangkok northward to Laos. Upon return to Bangkok, the RT-33 was then flown by non-recon pilots to deliver the aircraft and its film to the photo-analysts who were no longer in Vientiane but moved to RTAFB Udorn. On 5 November 1961 the last Field Goal recon mission was flown and all subsequent reconnaissance missions were now assigned to a detachment of four McDonnell RF-101C Voodoos that were assigned to Tan Son Nhut Airport in Saigon under Operation Pipe Stem.
Subsequent reconnaissance efforts were now flown by regular USAF units, but the work done with that RT-33 resulted in the RT-33 being marketed by Lockheed to foreign air forces needing an inexpensive jet reconnaissance capability.
Source: Voodoo Warriors: The Story of the McDonnell Voodoo Fast Jets