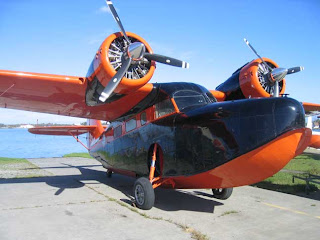 In the fall of 1936 Grumman Aircraft was rapidly expanding having proven itself capable of producing fast advanced Navy biplane fighters that were set the standard for toughness during carrier operations. The company had just broken ground on its Bethpage plant on Long Island that would be its long-time home right on up to the production of the F-14 Tomcat. With the business of the United States Navy secure, Leroy Grumman and the founders of the company decided it was time to diversify by entering the civil market with their first aircraft designed for the commercial market, the Grumman G-21 Goose, which also would be Grumman's first monoplane design as well as it's first twin-engine aircraft. The Goose drew upon the company's experience with amphibians (all the founders of the company as well as Leroy Grumman had worked previously with Loening Aircraft on that company's amphibian designs) as well as its work on the lightweight floats added to the Navy's O2U Corsair biplanes and the Navy's JF Duck utility seaplane.
While Grumman's team was beginning early design work on what would become the Goose, a group of ten wealthy Long Island businessmen and avid sportsmen led by New York businessman Wilton Lloyd-Smith, formed a syndicate to look at the possibility of having a private aircraft built to their specifications. Since the members of Lloyd-Smith's group all lived on waterfront estates on Long Island, their aircraft would have to be a seaplane that would allow them to commute back and forth between the Wall Street waterfront and their Long Island estates. Since some of the members didn't have waterfront property, the aircraft would have to be amphibious as well. With their needs in hand, they consulted with Grover Loening, who at the time was the only prior designer of civilian amphibians with his 1920s' vintage Air Yacht. At the time, Loening was long out of business for himself having sold his company to Keystone Aircraft and was working as a consultant as well as an investor in Grumman Aircraft. Loening reviewed the syndicate's needs and created a preliminary design that was a twin-engine, high-wing amphibian.
It was here where Loening's design for the syndicate and the preliminary design work at Grumman crossed paths. Perhaps it wasn't coincidence as some of the members of the syndicate as well as Leroy Grumman and one of the other founders of his company were all members of the same country club on Long Island, but any such record has been long lost to the mists of history. When Loening was asked by the Lloyd-Smith who would he would recommend to build their design, without hesitation Loening pointed the way to Leroy Grumman's office in Bethpage. It was a happy combination- ten of the wealthiest Long Island businessmen willing to pay for the plane they wanted and Grumman, eager to enter the commercial market, with a ready-made order for 10 aircraft.

In addition to Wilton Lloyd-Smith, a prominent New York lawyer, the other members of his syndicate who ordered the first production versions of the Grumman Goose included Henry S. Morgan (founder of Morgan Stanley), Marshall Field (of the department store fame), E. Ronald Harriman (philanthropist and investment banker), C.W. Deeds (head of United Aircraft, predecessor to Pratt & Whitney), Robert McCormick (owner of the Chicago Tribune), Boris Sergievsky (head test pilot for Sikorsky Aircraft) and C.V. Whitney (one of the founders and investors of Pan American Airways). With such prominent businessmen ordering the Grumman Goose, the project was accorded top priority and the prototype first flew on 31 May 1937. With a few adjustments and modifications, the first Grumman G-21A Goose was handed over to Wilton Lloyd-Smith on 3 July 1937 for a price of $60,000.
The Goose was an immediate success and the need for more capital to expand the Bethpage production line for the aircraft resulted in Grumman registering with the Securities and Exchange Commission for the public sale of company stock and listing on Wall Street. The connections made with Lloyd-Smith's syndicate in bringing the Grumman Goose to fruition paid off handsomely for Leroy Grumman's small company with hundreds of G-21s built for both private owners, airlines and military air arms worldwide. The sales of the Goose helped Grumman invest heavily in its next Navy carrier fighter which first flew as a prototype in 1937. The XF4F-2 would later become famous during the Second World War as the F4F Wildcat.
Source: The Grumman Story