United Air Lines' legendary president William "Pat" Patterson listed his corporate goals in what he called his "Rule of Five"- safety, passenger comfort, dependability, honesty, and sincerity. To Pat Patterson, the goal of safety was the most important that he asked each and everyone one of his employees to strive for above all else. Despite the rapid advances in aviation technology in the 1920s and 1930s, airline flying was nowhere near the routine that we today take for granted. Patterson believed that the industry as a whole would benefit from investing in technology that increased aircraft safety. His first tangible commitment to that goal came in 1929 when the United Communications Laboratory based on the second floor of a hangar at Chicago Midway was established as the airline industry's only communications laboratory. One of the first developments from United Air Lines engineers assigned to the Communications Lab was a practical two-way radio for aviation use.
In 1937, one of United Air Lines' Boeing 247Ds, NC13365, was pulled off the line and assigned to the airline's laboratory at Chicago Midway. This particular aircraft also happened to be the last Boeing 247 built. Re-registered as NX13365, the interior was fitted with test benches to hold equipment and the ceiling hat racks were modified to carry wire bundles to and from the various test equipment being used. Nicknamed the "Flying Lab", the Boeing 247D made its first flights for what became the United Flight Research Lab (as its efforts moved beyond communications and into general flight safety) the standard all-over gray color used on United's 247 fleet at the time. Before long, however, NX13365 was repainted in an attractive white and red scheme with "Flight Research" titles on the fuselage.
The first assignment flown by NX13365 was the problem of static electricity build-up on the airframe. Particularly during bad weather, the static build-up on the airframe could reach levels sufficient to interfere with the communications and navigation equipment. Several Boeing 247s were lost due to accidents directly attributable to static build up on the airframe during flight. Working together with the Bendix Radio Corporation, NX13365 would log over 25,000 miles of flying developing a practical static "suppressor". A long wire extended from the tail that drew the static charge away from the airframe and dissipated it harmlessly. A resistor was part of the wire and a small waxed cup at the end of the wire kept it deployed in flight. Today we know these wires as the static wick dischargers on the wings and tail of modern aircraft. The first static dischargers were five foot long wires and true to his word, Pat Patterson had them fitted on every aircraft in the United fleet and shared the his lab's findings with the industry. 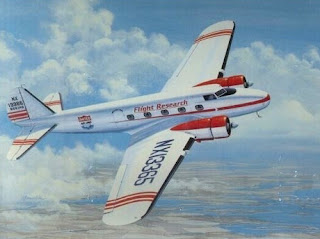 NX13365 was also used for the development of what the lab called a "terrain clearance indicator". With many crashes at the time due to CFIT in poor weather (controlled flight into terrain), United's engineers worked with Western Electric and Bell Telephone to create the first radio altimeter which provided the pilots constant updates of the relative height above the ground. If the aircraft descended too low, a red light on the radio altimeter came on, alerting the flight crew. The first public demonstration of the radio altimeter was conducted on a flight above New York City that continued north over the Hudson River and over the Palisades. Following the completion of tests of the radio altimeter, again and true to his word, Pat Patterson had radio altimeters installed on everyone of United's aircraft and as he did with the static discharger, shared the findings with the rest of the industry.
Before NX13365 was retired, United's engineers also developed an instrument landing system as well as a terrain-viewing television system in cooperation with the US Army Air Corps and also trialled different antenna configurations. In October 1945, United modified the aircraft back to passenger configuration and sold it to LAMSA (Lineas Aereas Mineras S.A.), a Mexican airline that United had invested in back in 1942. After flying with LAMSA for two years as XA-FIH "Estado de Sinaloa", it passed through several Mexican owners before ending up with an air taxi service that crashed the aircraft in Mexico City in 1952.
Source: The Boeing 247: The First Modern Airliner