An American Astronaut Saves the A300 and Airbus 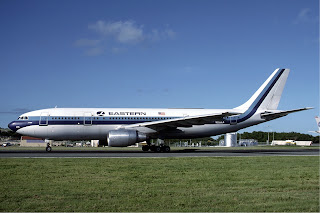 The first several years of Airbus' existence after the first flight of the A300 were miserable ones as orders slowly trickled in while the McDonnell Douglas DC-10 and the Lockheed L-1011 Tristar were racking up order after order from the world's airlines. Between the end of 1975 and May of 1977, Airbus failed to get even a single order for the A300. The joke at the factory at Toulouse was "Don't miss the last train out of town to Germany" in reference to the large number of German workers present. Part of the problem was the recession in the wake of the 1973 Yom Kippur War and the Arab oil embargo on the West. But a big part of the problem was the Airbus was an upstart facing the powerful sales machines of Boeing, McDonnell Douglas, and Lockheed. For a lot of the world's airlines, buying the A300 simply wasn't on their radar screen. The program was in jeopardy and the member nations of the Airbus consortium were getting restless as debates continued on whether they'd misread the market or not.
But all of that was to change with the passage of airline deregulation in the United States. The world's largest airline market in terms of passengers moved, breaking into the US market was a key goal for Airbus and one of the main reasons that they had sought the advice of Frank Kolk at American Airlines back in the late 1960s when the design was still being formalized. With deregulation, free market forces now determined routes, fares and frequencies on the US East Coast, one of the dominant legacy carriers was taking a severe beating on its prized routes between the US Northeast and Florida. Eastern found itself embroiled in a bruising market fight with National and Delta. Eastern was already operating the Lockheed Tristar on the routes and word got to Airbus that they were interested in a 200-seat aircraft with better operating economics than the Tristar. With only two engines, the fuel burn on the A300 was already lower than that of the Tristar and with 2/3 the seating capacity, Airbus felt they had an ideal product to meet Eastern's needs. 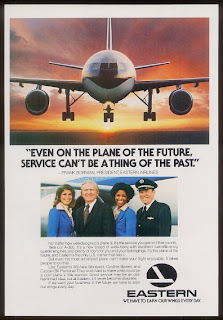 Eastern had been in discussions with Boeing, Lockheed, and McDonnell Douglas already but Eastern's financial position in the wake its battle with National and Delta meant it needed an aircraft with better economics than the Tristar and it needed them at a sweet deal. On the day of the final sales presentations by the all the manufacturers, Airbus was slotted in to present to Eastern's management and its president, former Apollo 8 mission commander and astronaut Frank Borman. Airbus' team gave its presentation and then offered a sweetener- they had four "white tail" aircraft (completed A300s that had no buyers) that Eastern could immediately lease for a four month trial. If they were happy with the aircraft, they could order more. Borman sent word to Toulouse after deliberations "Congratulations, you've got a blue-eyed baby." It was the breakthrough that saved the A300 program- after a very successful trial, on 6 April 1978, Eastern ordered 23 A300s with options on more. But the bold move by Borman upset many.
The Department of Commerce and some in the US government demanded an explanation from Borman. After all, political influence several years earlier was successful in steering Western Airlines away from the A300. Borman was accused of being anti-patriotic depsite his military and space records. Charles Forsyth, the VP for McDonnell Douglas, even angrily called Borman directly and accused him of being unpatriotic. Borman reportedly asked Forsyth what brand of luxury car he drove, knowing the answer wasn't American. Borman explained that the most valuable part of the Airbus A300 were its engines and those engines were GE engines along with a large amount of American content from thousands of subcontractors. Congressional hearings were even held at Boeing's urging with accusations of predatory pricing by Airbus to make the sales- many of the same arguments being made these days in Airbus versus Boeing sales fights. Regardless, it was a major achievement for the young Airbus Industrie and would become legend throughout Europe how an American astronaut saved the A300 program.
Source: Flight of the Titans: Boeing, Airbus, and the Battle for the Future of Air Travel