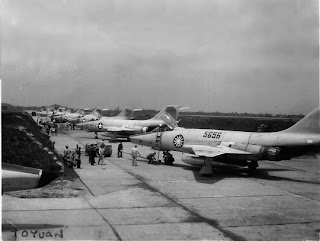 The Second Taiwan Strait Crisis occurred in 1958 when artillery units of the People's Republic of China bombarded the Nationalist islands of Quemoy and Matsu in a bid to retake them from Taiwan. In a bombardment that began in August of that year, nearly 450,000 shells were fired at the two Taiwanese islands in a standoff that also saw the first use of the AIM-9 Sidewinder when Republic of China Air Force (RoCAF) F-86 Sabres engaged PLAAF MiGs over the Taiwan Strait. During the crisis, US naval units were in the area to protect sea lines of communication from Taiwan to the two island outposts. As the crisis ended after 44 days in a stalemate, the US government decided that it needed more information on the disposition of Chinese forces on the PRC side of the strait. Some information came from RB-69 flights by Taiwanese crews and later clandestine P-3 Orion overflights also took place. But the RoCAF's reconnaissance F-86 Sabres and the RB-69s were increasingly vulnerable to improving Chinese defenses on the mainland. In November 1959, the USAF started Operation Boom-Town, a secret effort to utilize the much faster McDonnell RF-101 Voodoo in high speed, low level overflights of the mainland. 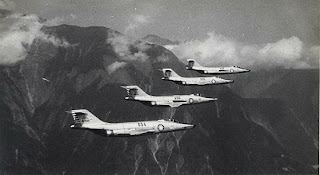 Chiang Kai-Shek authorized the formation of the 4th Composite Reconnaissance Squadron (CRS) at Taipei AB in Taiwan. Initially operating Republic RF-84F Thunderflash jets, the pilots selected for the 4th CRS were the veritable "cream of the crop" of the RoCAF. The USAF's 15th Tactical Reconnaissance Squadron (TRS) based at Kadena AB in Okinawa was selected to provide material support and training for the 4th CRS to convert to the RF-101 Voodoo. The first group of RoCAF pilots trained at Okinawa under conditions of great secrecy. In 1964 the 4th CRS completed its transition to the RF-101 Voodoo and aircraft were flown directly from the 15th TRS' flightline to Taiwan, whereupon they were immediately hangared and repainted in RoCAF markings. Officially the 4th CRS was an all-Taiwanese operation, but the USAF maintained an advisory presence at the RoCAF base, being officially designated as "Detachment 1, 13th Air Force, Shaw AFB, South Carolina, Taipei" (Shaw AFB being the homebase of all USAF reconnaissance Voodoo operations). Pilots and maintenance crew from the 15th TRS at Kadena were rotated secretly back and forth to work with the 4th CRS to keep the Voodoos there flying on missions over mainland China.

Officially the Taiwanese government stated that the Voodoos were purchased to maintain surveillance capability around the waters of Taiwan, but the RoCAF Voodoo pilots frequently trained in air-refueling with USAF KB-50s deployed to the area. The RF-101 already had an impressive internal fuel capacity that gave it an impressive range for a Century-series jet. Air-refueling simply gave the RoCAF pilots the range to reach targets deep inside the mainland.

The RoCAF Voodoo overflight program ended in 1970 with the possible shootdown of one RF-101 over the mainland, quite an impressive record given the speed at which the Taiwanese pilots converted to the Voodoo and the number of reported overflights conducted. Most of the Voodoos were returned to the United States, but one remains on static display in Taiwan.