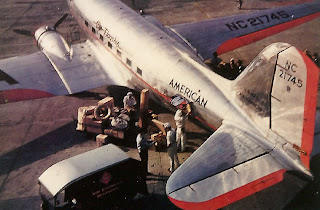 The relief efforts following natural disasters have often reminded me of the first humanitarian airlift in the United States after a natural disaster. It was September of 1938 and one of the few Category 5 storms to strike the US mainland had just come ashore with unprecedented destructiveness in New England, causing widespread devastation throughout Long Island, Connecticut, Rhode Island, and Massachusetts.

While the forecasting technology of the day paled in comparison with what we have today, there are sufficient meteorological records from 1938 that give an impressive picture of what historians call "The Long Island Express". The storm formed off the coast of West Africa and tracked westward. Lacking offshore weather buoys, the US Weather Bureau (the National Weather Service's predecessor) relied on reports from ships at sea to track the progress of the storm. From a climatological standpoint, most hurricanes in the late part of the hurricane season that form in the Eastern Atlantic usually track to the west and curve back to the northeast, remaining out to sea and having little effect on the US East Coast.

However, on the morning of 21 September 1938 as the storm was off the coast of Norfolk, Virginia, it made a sudden veer due north instead of continuing out to sea on a northeast heading. Not only did this storm head due north for New England, it also picked up speed with a storm motion of 70mph, making the "Long Island Express" one of the fastest moving hurricanes in recorded history.

The sudden change in direction caught most of New England unprepared and when the hurricane made landfall that night, wind speeds gusting to as high as 185mph were recorded along the coast of New England. The extreme forward speed of the storm made the right quadrant winds 70mph faster than they were and this put Long Island, Rhode Island, and eastern Massachusetts square in the crosshairs of this monster. A 12+ foot storm surge slammed into Providence, Rhode Island and all throughout the area, lines of communication were cut- roads, railroads, phone and telegraph lines. Not until Hurricane Andrew hit Florida in 1992 would there be a storm that caused as much damage as "The Long Island Express". The Boston area found itself cut off from the rest of the nation as thousands were made homeless and the local infrastructure of the area was destroyed.

Enter C.R. Smith. Two years earlier Jack Frye of TWA decided the US airline industry needed a common voice to work with the government in improving air safety and efficiency. He managed to convince C.R. Smith of American, Eddie Rickenbacker of Eastern, and Pat Patterson of United to form the ATA- Air Transport Association. Headed by a former military aviator of unqualified technical experience, Edgar Gorrell, one of the ATA's first acts under Gorrell was to propose that the airlines form a plan to organize their resources in the event of a national emergency to form what Gorrell called a "civil reserve air fleet".

Now keep in mind that this was a time when the airlines were run by rugged individualists like Rickenbacker or Smith. Just the fact that four disparate personalities of the magnitude of Smith, Frye, Rickenbacker, and Patterson even agreed to form the ATA was a miracle in and of itself. But to form a unified plan in case of national emergency? The other member airlines of the ATA balked at the idea despite Gorrell's pleadings- "If we don't have our own plan, the government will shove one down our throats!" But only one airline president backed the ATA proposal and that was C.R. Smith of American Airlines. The ATA proposal languished for two years until that dark night that the "Long Island Express" came ashore.

The only airline that operated on the New York-Boston route was American Airlines and C.R. Smith immediately assigned every available DC-3 the airline had to fly humanitarian missions to Boston Logan Airport which was pretty much the only functioning airport in the area in the hurricane aftermath. Flights were cancelled throughout American's system as DC-3s were pulled for the airlift. Within 24 hours, C.R. Smith realized the job couldn't be done alone- usually American carried 200 passengers a day between Boston and New York and on the first flight out of Boston, over 1000 people were looking for seats on American's mercy flights. With the local authorities also wanting to deploy medical personnel as well as rescue and construction crews to New England, American needed help.

C.R. Smith phoned Edgar Gorrell for an urgent request for help- Gorrell in turn telephoned Jack Frye at TWA, Eddie Rickenbacker at Eastern and Pat Patterson at United. Each of these airlines had the most capable airliner of the day, the DC-3, and Gorrell asked them to pull their DC-3s out of service to fly the humanitarian airlift. Without question, without argument, the three airline presidents had DC-3s streaming into Newark within hours of Gorrell's call. He then secured temporary route authority for them to fly the New York-Boston route from Washington (the nation's airlines had their route structures regulated by the federal government in those days).

For the seven days following the hurricane's landfall, the four airlines operated 24 hours a day, flying over 60,000 tons of medical supplies into Boston, carrying over 1000 rescue workers into the area, and flying out over 1500 refugees out of the area. Those numbers pale in comparison to the airlift that took place after Hurricane Katrina in 2005, but keep in mind that the DC-3 only carried 21 passengers and was the state of the art in 1938. American and TWA even added their older DC-2s to the airlift. Newark, as the bridgehead of the airlift, was the scene of unprecedented cooperation by the rival airlines. American's crews often led formations of other aircraft to Boston as some of TWA and United's pilots had never flown on the East Coast. Airlines shared spare parts, even mechanics to keep the airlift running.

On 13 December 1941 President Franklin D. Roosevelt was prepared to sign an executive order to nationalize the US airline industry. Sitting in the Oval Office with FDR on that day were Edgar Gorrell and the chief of the US Army Air Corps, General Henry "Hap" Arnold. Both of them convinced FDR to tear up the executive order as Gorrell showed the President C.R. Smith's war plan to mobilize the airlines. In his postwar autobiography Global Mission, General Arnold noted that air power was useless without air transport.

Source: When the Airlines Went to War: The Dramatic, Never-Before-Told Story of America's Civilian Air Warriors