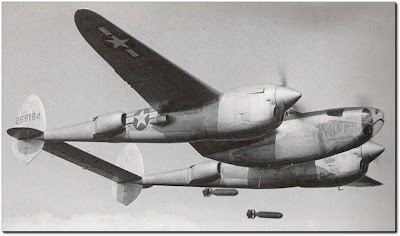 One of the more unusual experiments in bombing tactics by the Allies in the Second World War was the Lockheed P-38 Droopsnoot version of the Lightning twin-engine fighter. The idea behind Droopsnoot was that a bombardier-equipped P-38 acting as a formation leader for standard P-38s carrying bombs could carry out missions on smaller targets with an economy that reserved the heavy bombers for larger targets. A formation of P-38s was seen as less likely to draw the attention of the German air defenses that were on the lookout for heavy bomber formations and the performance of the P-38 as a fighter made it "self-defending".

In 1944 the Eighth and Fifteenth Air Forces in England modified a number of P-38 Lightnings into Droopsnoots. The usual modification involved removal of the guns and the replacement of the nose cone with a Plexiglass nose piece with a flat window for aiming a Norden bombsight. Additional windows were added to the sides of the nose to provide light for the bombardier who entered via a hatch on top of the nose but also had an escape hatch on the ventral side as well. The bombardier also had panels for arming the bombs as well as flight instruments and an interphone connection to the pilot. Provisions for oxygen and heating were also installed in the Droopsnoot nose.

Most Droopsnoot missions were carried out between 10,000 to 20,000 feet with a formation of standard Lightnings dropping their bombs on command by the Droopsnoot's bombardier who would call out a 10-second pre-release countdown. Some missions were even flown with the standard Lightning's bomb release switches hooked to the VHF radio equipment to allow the Droopsnoot bombardier to drop all the bombs in the formation by radio command.

By 1945, the Eighth Air Force's initial enthusiasm for the Droopsnoot dampened following operational experience. P-38 pilots weren't trained in tight formation keeping like bomber pilots were and less-than-optimal formation flying led to dispersion of the formation's bomb load, lessening the destructiveness on small targets. It was also found that the Droopsnoot missions were no substitute for individual ground attack aircraft making shallow to medium dive angle attacks on ground targets. After the first Droopsnoot missions were flown, the German air defenses were on the lookout for large formations of P-38s which acted differently than escort fighter formations and fighter sweep formations. Given that many of the Luftwaffe's fighters had been driven away from the coastal areas of continental Europe, most Droopsnoot missions encountered little air opposition, but those that were attacked by the Luftwaffe found that the lack of rear-facing armament was a disadvantage. Escort fighters ended up having to be assigned to Droopsnoot missions, rendering the "self-defending formation" argument irrelevant.

The final nail in the coffin for the Droopsnoot with the Eighth Air Force was an analysis showing that medium bombers like the B-25 Mitchell and B-26 Marauder could carry more bombs to the target than a Droopsnoot-led formation and better defend itself with the multiple gun positions on the medium bombers.

The Fifteenth Air Force was a bit more positive in their evaluation of the Droopsnoot missions. Targets were more closely selected for light flak and the formations were much smaller than the Eighth Air Force's formations with only 8 Lightnings being led by a Droopsnoot. Tactics were more along the lines of that used by the medium bomber force than the heavy bomber force, but that still didn't change the fact that, like the Eighth Air Force, the Droopsnoot missions still needed fighter escort and were actually less economical than a comparable mission flown with either B-25s or B-26s. The Droopsnoot Lightnings did find a niche with the Fifteenth Air Force as radar-equipped pathfinders (with a radar replacing the Norden bombsight) and weather reconnaissance aircraft dispatched ahead of heavy bomber missions to scout out the weather over the planned targets. In the summer of 1944, for instance, the Fifteenth Air Force used Droopsnoots as weather scouts over the oil refineries of Ploesti, Romania, before their attack by B-24 Liberators. The orbiting Droopsnoots relayed the positioning of German smokescreens so the attacking heavy bombers could adjust their inbound routes for maximum visibility of the targets.