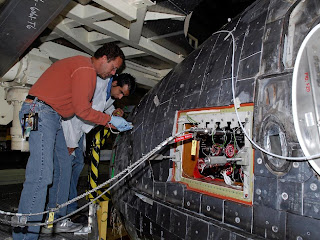 In the 1960s as preliminary design work began on what would become the Space Shuttle, thoughts turned to ways of protecting the vehicle on its fiery re-entry into the atmosphere. The thermal protection issue was closely intertwined with what structural material to use for the spacecraft. One school of thought was based on what was used on the X-15 program- a "hot structure" that was tolerant to high temperatures. Unfortunately this meant the use of expensive and possibly rare alloys. Since the X-15 was a smaller vehicle than what was planned for what would become the Shuttle, a hot structure made more sense. But a vehicle that was much bigger in size presented cost and materials challenges with the hot structure approach. Most of the design groups involved in the early planning preferred to use a conventional-alloy structure protected by a series of metallic shingles at first, but the weight of a reusable metallic thermal protection system was daunting, to say the least.

Lockheed had the necessary breakthrough that would allow the Shuttle to have a conventional-alloy structure but have a lightweight thermal protection system. Since the late 1950s Lockheed had been working on what it called a "reusable surface insulator" (RSI) made of ceramic compounds. By 1960 the company had applied for a patent on a material made of ceramic fibers. In 1962 Lockheed had created a ceramic electro-magnetically transparent radome 32 inches in diameter for the Apollo program, but the design changed and Lockheed's radome was never used in flight. However, the experience proved valuable for Lockheed which developed a special insulator that was made of a fibrous structure filled with the spaces filled with Plexiglass compound. They called it "Lockheat" and unlike the heatshields used on spacecraft of the day which were ablative (they charred to provide protection), Lockheat's material was called evaporative- the materials slowly evaporated, creating a protective gas layer. Different types of fibers were tested such as aluminum, silica, and born. Eventually by 1965 the company's Lockheat LI-1500 settled on silica fibers. It was light at only 15 lbs per cubic foot and was completely reusuable, being able to survive repeated heating past 2,500 degrees Fahrenheit. The Air Force flew a test sample in 1968 on a re-entry test vehicle and it passed with flying colors. LI-1500 is considered the progenitor of the Space Shuttle's current thermal protection tiles.

Lockheed continued to develop the silica-based RSI but they couldn't overcome the fact that it was very brittle. It couldn't cover an entire spacecraft, it had to be applied in small tiles calculated to be about 6 x 6 inches in size. With a small gap around each tile, the vehicle structure could deform slightly without compromising the integrity of thermal protection. Since the structure under tile even the small size of 36 square inches could still deform and crack it, the tile was bonded to a felt pad which in turn was bonded to the vehicle structure. A room-temperature vulcanizing adhesive was developed to affix the pad to the tile and the tile and pad to the spacecraft.

The silica-RSI tiles, though, weren't enough protection for the nose and wing leading edges for the proposed Shuttle Orbiter as those areas got even hotter than the tiles could tolerate. To solve this problem, the prime contractor of the Shuttle, North American Rockwell, turned to LTV (Ling-Temco-Vought) which had developed a reinforced carbon-carbon (RCC) material that was to be used on the cancelled X-20 Dyna Soar program. The RCC could easily heat up to 2,700 degrees F yet keep the spacecraft structure well below the 350 degrees F limit for aluminum. The black tiles were designed to protect up to 2,300 degrees F and white tiles were used to protect areas up to 1,200 degrees F. Those areas of the Orbiter that did not heat up past 750 degrees F were protected by a special blanket material called flexible reusable surface insulation, or FRSI.

As work continued on the Shuttle Orbiters in the mid-1970s, analysis found that stiff spots in the felt pads caused by gaps between the adhesive and the tiles and/or Orbiter structure could weaken the integrity of the tiles. NASA decided on what was called a "densification" process to strengthen the felt pads and a special silica slurry was created by DuPont that was applied to the back of the tile, baked for 2 hours, then waterproofed before being bonded to the felt pad.

But there was a problem. Columbia was nearing completion when the stiff spots in the felt pads were discovered and Columbia was due to be flown from Palmdale, California, to the Kennedy Space Center. Feeling that moving the Shuttle to the KSC was symbolic and important for program morale, Columbia was moved to KSC with 6,000 tiles missing and 24,000 already-installed tiles to be removed and modified. Not all the tiles had to be removed as it turned out, but each one already installed had to be tested for weakness. For 20 months, three shifts a day, six days per week, each tile was tested, removed and modified if necessary. The remaining 6,000 tiles still had to applied. This was March 1979 and by the end of November 1980 the tedious work was completed and further preparations could continue for Columbia's maiden flight on 12 April 1981.

Source: To Reach the High Frontier- A History of US Launch Vehicles, edited by Roger D. Launius and Dennis Jenkins. The University Press of Kentucky, 2002, p382-388.
at 23:09