The Navy Diversion for the Son Tay Prison Raid 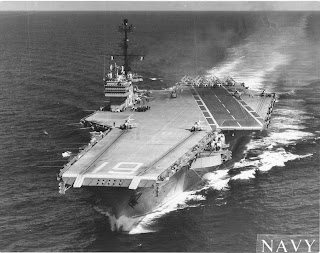 My blog posting yesterday about the Son Tay prison raid made mention of a Navy diversionary strike that allowed the raiders to sneak into North Vietnam nearly unopposed. One month before the Son Tay raid in November 1970, the main architects of the raid, Colonel Arthur "Bull" Simons and USAF Brigadier General Leroy Manor, visited Vice Admiral Frederic A. Bardshar. Admiral Bardshar was the commander of Task Force 77, the main aircraft carrier group of the Navy's Seventh Fleet and responsible for combat operations in Southeast Asia. Together the three men developed an ingenious deception plan to be carried out by Navy aircraft the night of the Son Tay raid.

President Lyndon B. Johnson declared a bombing halt on 31 October 1968 on all targets north of the 17th Parallel (the DMZ between North and South Vietnam). The purpose was two-fold, to tempt the North Vietnamese to the negotiating table at the peace talks in Paris and to help support the presidential campaign of Vice President Hubert Humphrey who was running against Richard Nixon in the 1968 elections. While neither plan worked for Johnson, Richard Nixon left the bombing halt in place as part of his plan to draw down US forces in Vietnam. By the time of the Son Tay raid in November 1970, a major Navy air strike had not taken place on North Vietnam (though there were numerous reconnaissance flights and reactionary attacks to protect those missions) for two years. With the Son Tay raiders entering North Vietnam via the "back door" through Laos, the US Navy's plan was to create as much havoc and panic amongst the North Vietnamese air defense system as possible to divert their attention to the east.

On the night of the raid, the three aircraft carriers Oriskany, Ranger, and Hancock launched a total of seven Grumman A-6 Intruders, twenty Vought A-7 Corsair IIs, eight McDonnell Douglas F-4 Phantom IIs, four Vought F-8 Crusaders, six ECM jamming aircraft and another fourteen support aircraft. The Crusaders and Phantoms were armed with air-to-air missiles to deal with any MiGs that rose up that night but the only offensive weapons carried by the rest of the Navy diversion force were AGM-45 Shrike anti-radar missiles. Instead of bombs, they also carried photoflash bombs and long-duration flares. The force crossed the beach "feet dry", creating a massive set of radar tracks that caused near-panic amongst the North Vietnamese as such a large force hadn't entered the area for two years.

This way, the Son Tay raiding force entering from Laos, were it to be detected that night, would have looked like a combat search-and-rescue force operating in support of what the North thought was a major strike against targets in the previously forbidden zone. Many of the Navy pilots found the mission bizzare but at the time of their preparations, launch, and execution of their vital mission, they were all on a "need to know basis" and it was only upon their return to the carriers of Task Force 77 in the Tonkin Gulf that they were informed of the role they played in supporting the Son Tay raid.


Source: Beyond Hell and Back: How American's Special Operations Forces Became the World's Greatest Fighting Unit