The Drug-Busting Night Wolves of VAW-77 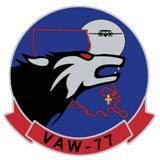 I had earlier featured US Navy E-2 Hawkeye squadron VAW-77 "Night Wolves" and the crucial role they played during the rescue efforts in New Orleans during Hurricane Katrina. It turns out that VAW-77 is a very unique squadron within the US Navy on several counts. Though a Reserve unit no different than many of the reserve air units of the different branches of the US military, VAW-77's primary mission is Counter-Illicit Trafficking (CIT) and as such, they are not required to operate from aircraft carriers and therefore its pilots do not have to go through carrier qualifications.

Eighty percent of the squadron's flight hours are devoted to CIT operations and when operating from several locations in the Caribbean and Latin America, fall under the jurisdiction of US Naval Forces Southern Command as part of the Joint Inter-Agency Task Force South (JIATF SOUTH). Deployments depend upon intelligence received from a variety of sources. During CIT missions, the E-2 is paired up with another air asset that acts as the "low bird" while the Hawkeye operates as the "high bird" cueing the "low bird" to targets of interest. In most circumstances, the "low bird" is a Navy P-3 Orion or a US Coast Guard HC-130 Hercules. Other times the "low bird" role may be filled by aircraft of cooperating nations in the Caribbean and Latin America. At times, the E-2 has to act in both roles, dropping down to low altitude to make visual contact, but this is done as little as possible as it's a less than ideal tactical arrangement.

The other 20% of the squadron's flying time is devoted to Fleet Support and Homeland Defense. The Fleet Support mission usually entails area surveillance for the missile ranges of the Gulf of Mexico while Homeland Defense missions can include border surveillance and airborne control of air defense assets. In addition, VAW-77's E-2 Hawkeyes have been tasked with providing surveillance for Air Force One and range control during Space Shuttle and rocket launches from Kennedy Space Center/Cape Canaveral. When other E-2 squadrons have downtime between deployments, junior personnel are often sent to VAW-77 to gain experience and flight hours.