One of the Most Important Missions of the C-133 Cargomaster: Transporting ICBMs 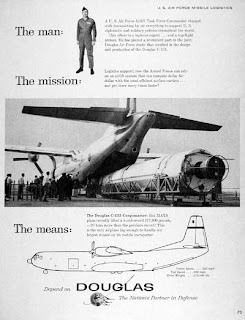 One of the principal missions planned for the Douglas C-133 Cargomaster was the transport of the ballistic missiles of the Strategic Air Command. With the Atlas ICBM in development and the Thor and Jupiter IRBMs already deployed in Europe, no other aircraft had the performance and capacity to move the missiles to air bases near the launch sites. With the entry into service of the Titan ICBM, the aft cargo doors of the C-133 had to be modified from the original configuration which consisted of the ramp and a single cargo door that hinged upward. As the Titan was a significantly wider missile, the single upward-hinging door was replaced by a three part unit that consisted of two doors than hinged outward to provide more clearance and a small section of the upward-hinging door at the very end of the tail. Not only did this give a wider opening, but it also added an additional 3 feet of space for the longer Titan missile.

The first Atlas missile was transported in 1959 and the first Titan and Minuteman missiles were transported on the Cargomaster in 1962. The thin skin of the Atlas was particularly challenging to protect during loading as the fit was extremely tight. A complex rail loading system was used for the Atlas and it had to be aligned within a tolerance of less than 2 mm with the cargo rails inside the Cargomaster, necessitating use of a surveryor's transit. Fuel load, tire pressure and landing gear strut compression were all closely monitoried and the loading and unloading could easily take a full day.

The solid-fueled Minuteman ICBM was easier to load but required a special cradle that had hydraulic translating jacks to align the cradle with the rails in the C-133's cargo hold. Since there was no integral winch on the Cargomaster, the Minuteman cradle had one of its own to facilitate loading. A portable winch was developed for missile loading, but it wasn't any easier for ground crews as it required a forklift to move and position.

NASA also found value in the ICBM transport capability of the C-133 Cargomaster as it was used to deliver launch vehicles to Cape Canaveral in Florida. Between 1966 and 1969, NASA operated a C-133 as tail number 928 from both Dover AFB and Ellington Field near the Johnson Space Center for over 200 flight hours. It also served in the development of the Apollo spacecraft by air dropping a boilerplate Apollo command module to test the recovery parachutes. The C-133 wasn't approved for air drops, but the cargo ramp and doors were removed and the boilerplate was dropped from a fixture in the opening. Thirty four drops were made at National Parachute Test Range at El Centro, California.

NASA went as far as to do wind tunnel testing on a twin-finned C-133 that could carry Saturn rocket stages on its back similar to what the Russians did years later with Energia rocket components on the Antonov An-225 and Myasishchev M-4 Bison. NASA eventually settled on using the Aero Spacelines Super Guppy as a more economical approach.