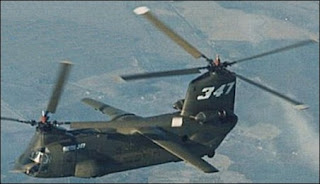 But the most unique feature of the Model 347 was a variable-incidence wing that created extra lift to offload the main rotors. There was also a retractable gondola in the forward fuselage that had a full set of flying controls during flying crane operations. As the twin rotors no longer overlapped, some degree of noise reduction was also achieved. The Model 347's performance was greater than that of the standard Chinook, but flight testing ended in 1975 with the cancellation of the HLH program.

The BV-347 is currently on outdoor static display at the US Army Aviation Museum with sixty other aircraft at Fort Rucker, Alabama.
Source: Air International, October 2009. "Fort Rucker- Home of Army Aviation" by Kees van der Mark and Arnaud Boxman, p80.
at 20:41